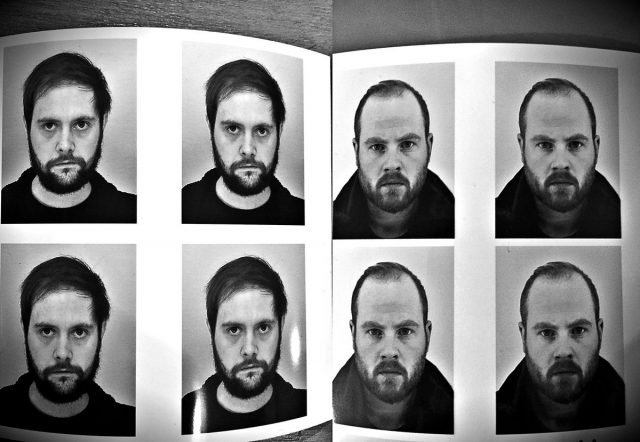 The world, at present, is all bluster and turmoil, a broken cacophony of madness. In to that void stepped the latest album from general noise-mongers Biscuit Mouth, Hot Change.

After a year confounding listeners the album has finally made its way on to vinyl to uncover new depths. 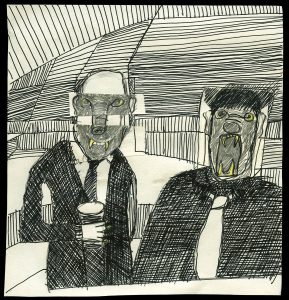 The two-piece clearly don’t want to make this an easy listen, with them deconstructing what a listener might consider a song before building it up again into new, bizarre forms. Defying genre elements of punk, rock, funk and experimental, these elements all feed into what can only be described as kinetic, frenetic noise.

But at the same time this music is also enthralling, engaging and at times accessible. Hot Change is a mess of wonderful contradictions.

Opener ‘Kenneth the Lampooner’ is driven by bass and yelped vocals and harks back to the fragile, sonic despondence of early Liars, and implodes in a wall of No Wave sax-noise.

‘Test Yourself Cheaper’ is a dark, stalking, creeper of a tune as mutated guitar plods along while crazy, preacher vocals emit. It explodes into a psycho, rockabilly breakdown.

Biscuit Mouth pack an insane number of influences into the mix and it is remarkably that such complex noise can come from a mere two-piece.

The rather unique instrumentation from their Buitar (that’s a combination of bass and guitar) creates a sonic space where the guitar and bass lines don’t often feel in unison but figh for their own space – a fact that simply adds to the aural confusion of the record.

‘Horse Story’ revels in this ‘space’ whilst going on a full-on, rock attack at times akin to the manic delivery of Shellac.

At the album launch they introduced ‘It’s Not For Everyone’ as the ‘Sonic Youth song’ and the surging, uplifting noise has much in common with the New York legends, but the break into dark, punk-funk recalls the frantic, funk experimentation of the best post-punk.

Closer ‘Ten’ is an exercise in pure noise which comes to an abrupt end as if the input to the recording studio has simply been cut.

Hot Change has much to enjoy and as much to endure, which is what makes it such a compelling listen.

If you are looking for a new rock record to challenge your concept of the genre, force you to engage and leave you wondering what just happened, Biscuit Mouth have  delivered it.