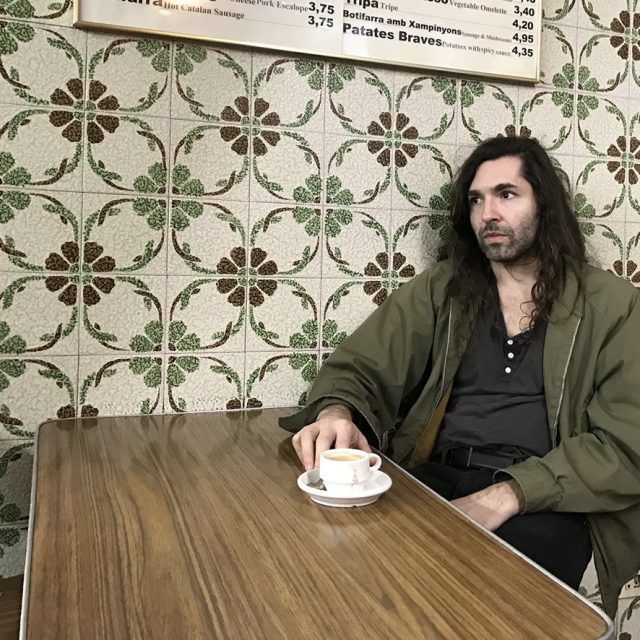 Zaragoza, Spain – a siesta-filled quiet city brimming with antiquity, is the home of Kim Fasticks – an acoustic singer / songwriter who wanders the narrow, cobblestone streets in search of his next song.  His first “proper” release on Analog Love, Sex & Death, while only 33 minutes in length, showcases an entire surreal world that exists within his mind. While previous self-made releases were predominantly bare and acoustic, Sex & Death benefits from a wide variety of sparse overdubs by Fasticks and producer Paco Loco.

First song, ‘Hold On’, sets up the album as being written from the perspective of a man unsure of the world, but confident in his ability to grow, and escape it through his writing and poetry. ‘You Break’ follows, containing John Cale, Velvet Underground-era like instrumentation, while the song is the first of several that contain a somewhat predominant theme, which is a general poetic romanticism that occasionally reveals what is likely a broken heart.

Next song ‘Crack’ shows yet another intriguing aspect of Fasticks’ originality, an ability to strangely combine words and phrases in a way that makes the listener wonder if it’s a mis-translation, or if it’s intentional? Fasticks sings, “I have just hang my soul / Hey just a plant in the middle of the land / where we used to make the ground”.

His unusual timing and song changes, along with his fragmented, stream of consciousness lyrics, are at times reminiscent of Syd Barrett’s solo work.

The best track on the entire album must be the following song, ‘Lack Of Endorphin’. Glockenspiel overdubs introduce a catchy melody with lyrics that hint at manic depression, with a strangely irreverent sense of humour contained throughout.  “Too many things to think / I’m a loser, NOBODY LOVES ME” Fasticks sings, holding back laughter in the last line. Indeed, there’s an underlying sense of humour throughout the broken English filled album that adds to its charm.

‘Four Months Of Love’, the first single, is the first containing a full band throughout. It is a personal tale of a failed past relationship – although hard to fully understand from an outside perspective. Most important is the awesome manic vocal echo at 2:40 in the song.

‘Book of Sand’ and ‘Sidewalk’ follow, both emblematic of a man who writes songs seemingly from the perspective of a presumably slightly drunk reverie, the latter containing horn overdubs reminiscent of Jim O’Rourke or Whitney.

‘Kill & Fuck’ is the strongest example of another theme in the album – one of anger and bitterness.  One thinks it’s that element of reality that Fasticks seeks to escape through his songs. Next song, ‘Maybe Is Me’ finds Fasticks trying to escape the colour black and to add as many more colours to his palette as he can find.  Indeed, there is a sense of hopefulness throughout the darker moments of the songs.

Final track ‘The Idiot’ is as dreamlike as the rest of the album. Although the shortest song on Sex & Death, it seems to provide a perfect ending, with unusual melody changes and unpredictable overdubs complimenting what devolves into a manic finale, before closing out as serenely as it started.

Because of its intimate and acoustic nature, Sex and Death might be better listened to alone, in a low-lit setting preferably. Upon repeated listens, Kim almost seems like a close friend, with whom the listener relates to as if they’re both in on some kind of secret knowledge.

It’s this relatablity that makes the album as a whole among the best releases of 2018 so far.