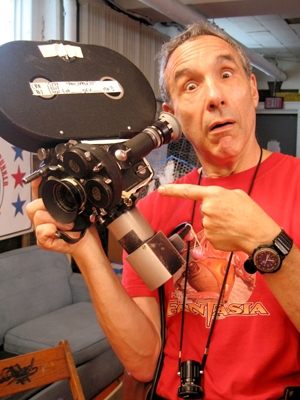 “Farting is one of the rules of Troma script writing. In return to Nuke ‘Em High you see a beautiful woman fart, you see a duck fart, you see a dog fart.” Juvenile, puerile, inappropriate, distasteful – this could be used as a summary of Lloyd Kaufman and his Troma film company in the annals of movie history.

“Return to Nuke’ Em High had a great audience last night at the Prince Charles. Volume One was beautifully received and all the audience wants to see Volume Two so it’s pretty good! Troma has a great relationship with its fans and I listened to the fans and the fans wanted me to get back and revisit Class of Nuke ‘Em High and direct the film.”

What is it about a studio responsible for titles such as The Toxic Avenger, Killer Condom and Rabid Granniesthat has seen it last for 40 years outside of the cinematic mainstream, and with so many fans worldwide? Its secret lies in the surreal humour of its low-budget releases. Troma challenges convention touching subject matter just too disgusting for mainstream studios, and doing it with its tongue wedged firmly in its cheek.

Graduating from Yale in 1968, with classmates including Oliver Stone and George W. Bush, Kaufman fell in with John G. Avildsen (future director of Rocky and The Karate Kid) collaborating for several years. Kaufman also served as the executive in charge of locations on a little film called Saturday Night Fever.

In 1974, he set up Troma to distribute independent comedies and action films. He paid his rent with other film work but it is clear that Troma has always been his passion.

“I identified John Avildsen as a talented director when he was directing Joe and I stuck with him. And Troma to this day distributes Cry Uncle which is Avildsen’s movie after Joe. And then he took me with him when he made Rocky. And Troma produced the best part of it. It was all educational for me and I learned as much as I was going to learn working on Rocky and Saturday Night Fever. We set up Troma in 1974, so that Michael Herz and I could make our own damn movies and possibly, hopefully, someday enable other young, independent directors to have a shot at being independent.”

“We are going into our 40th year, it’s miraculous. We use our own money, so we just don’t have any more money. It’s always difficult. You don’t want to be in debt. We’ve had to keep it to half a million dollars approximately.”

“You see we continued it, it is not just a matter of being disgusting and gross but a matter of weaving the story! That’s pretty interesting stuff! It’s being remade. Poultrygeist: Night of the Chicken Dead  has some amazing explosive diarrhea, where you are inside the toilet, where you see the ass sit down on the toilet you cannot imagine how difficult it was to shoot! Technically that rivals Hitchcock’s Martin Balson falling down the stairs scene.  There is no doubt that Hitchcock would have been fascinated. Needless to say it did get some amazing reactions from the audience. We are in it to make some sociological and political points.”

Needless to say, Troma has caused some serious outrage, and their work has left a legacy of shock. The ‘sick’ films of today draw direct lineage with the work of Troma – some people even graduated from their ranks.

“Human Centipede is a good film, it’s a really good film. It’s well edited, and well shot. Same with Eli Roth. He’s  into Troma movies and he started with us. His favourite movie of all time is Mother’s Day, which is my brother’s film, which has been remade.”

“Eli Roth is tremendously talented and his movies are great. On the other hand, Serbian Movie, I don’t get that one. It just seemed like they had been like they were trying to…..’ let’s look at Trauma and take all the disgusting scenes and put them together’. At least in my case it did not hold my interest.”

The trade off for their independence has been on budgets as keeping it low means total freedom. Even in 2013, Kaufman is still ‘sticking it to the man’.

But Troma has jumped on the technological advancements in distribution that are available, at the same time making a huge non-commercial gesture of thanks to its fans.

“We are going into our 40th year and we are giving away 250 movies on YouTube for our fans as a gift. We aren’t making any money out of that, it’s just a way to thank our fans and to commemorate our 40th year. So, that’s the main thing there. I think what’s happened is the making of cinema has been democratised, which is wonderful. Anyone can make a movie, you can make a movie for nothing, we’ve distributed a movie called Mr. Bricks: A Heavy Metal Murder Musical , which was directed by one of our employees Travis Campbell and produced by Justin Martell, who was my assistant. Lemmy from Motorhead gave us the theme song and the whole budget was less than £5,000.”

But enough about the history, why has Lloyd decided to visit some classic Troma for a second instalment of Nuke Em High?

“I had total control. As a director, I had the right to do anything I wanted. So really thanks to the fans, it’s pretty much their idea. Tarantino, of course who’s a Troma fan suggested it. The big problem for independent movies is getting screens. I make my movies for the big screen. I get thousands of people in them and humorous stuff going on in the background, which people don’t notice on the small screen. So Tarantino suggested the two volumes to make an event film. So the return of Nuke ‘Em High is an event film.”

And of course being Lloyd and being Troma, it’s not just a re-hash of the old movie to simply score a fan hit (well maybe it is a little). The boundaries are pushed again.

“This is the first movie of its type with a lesbian, same-sex story.  It deals also that American food factories are making crap that are making our students in high school fat as pigs. It deals with bullying which is the American pastime, which is a satire of American culture and hopefully an entertaining movie which gives people genuine emotions. There is a lot of cartoon violence. There is a woman who transforms and grows a penis the size of a telephone booth. So it’s surreal in a way.”

It’s not a film for everyone, just like Troma is not a mass-market, unit shifting kind of enterprise. With low-budgets, wacky and outlandish themes, a knowing level of juvenile humour to many people they represent the worst in filmmaking. But to others they are films to treasure.

Questionable, disgusting, distasteful and childish but also innovative, hilarious and always interesting – this is Troma at 40. It’s best to leave the descriptions to the man who understands what he has done better than anyone: