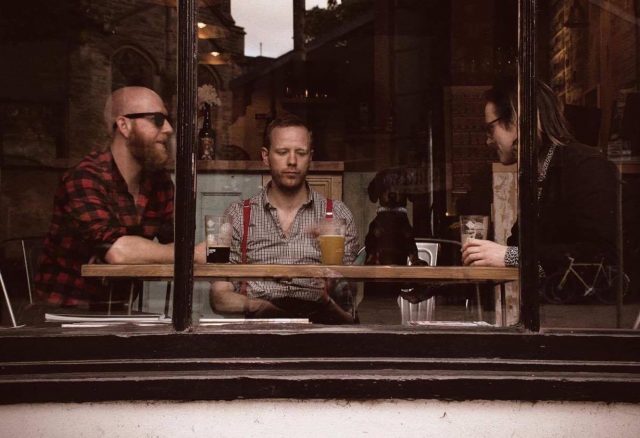 When bands talk about the different ‘eras’ of their existence it usually spans many years or even decades, but Derby rock trio Unqualified Nurse Band are explaining how soon to be released second album Trashland marks new ‘era’ for the band.

They have been in existence for under two years!

In that short time they have given the world an EP, a stunning debut album and are now on a second long-player. UQNB is an entity so brimming with ideas that their output equals bands who have been around double the time.

They have also had a number 78 chart placing for their Too Pure Singles Club release ‘Death Surf A52’. Not bad going!

I am sat in an over-run Wetherspoons pub, selected for its usual week night quietness, but today being the cheapest day all year for eating in a ‘spoons there is a noisy buzz as I talk to Chris Jones, Andrew Foster and Mark Jones to discuss how their jam-packed but short history has led to this new record.

The trio are no strangers to making music, drawing on over 15 years experience in several brilliant acts including Crushing Blows, Ghost Twins and Goddesses leading to this new project.

UQNB started life as a solo-project for Chris before bringing in the other members to pad out the sound and take it forward. This new music came with a definite plan to deliver something more simple and direct than the work of their previous bands.

Chris explains, “The Nurse stuff, by design, was made to be able to be played in any room. So the gear wasn’t an issue or the set-up – we could set up in the corner of the pub and it would sound like the record and if you go to a great venue it’s going to sound like the record.”

Mark adds, “When we formed Chris and Foster had just come out of doing Ghost Twins and were working with all this equipment and how to do it live and I was doing my solo stuff with weird guitar tunings and we came to do Nurse which is three guys playing loud rock n roll.”

That formula meant they emerged as a fully-formed entity. Seeing their early gigs was like seeing a very established band and this ethos soon birthed their debut album Debasement Tapes which our review called an “unashamed, direct, brutal assault on the senses.”

“Most of those songs are like a sledgehammer. That’s why it was called Debasement Tapes because it was a ‘debasement’ of rock n roll, it was noisy and relentless,” explains Chris.

But through the full-on noise there was much for listeners to explore, many hidden depths that nodded to the ‘massive departure’ of new record Trashland which expands on the band’s sonic template with more ambitious songs and adds pop-sensibilities into the bands pilfering of rock past.

Chris continues, “We always say we are part looking into the past, we love 60s pop and all that, and part is to the future if you’re looking for innovation. All the bands we love from the 60s, they changed the face of music after five years. When you’re a band like us who plays all the time and writes all the time, new eras come around really quickly.”

Trashland certainly marks something new for the band whilst retaining a lot of the directness of the debut. Take, for example, opening track ‘Transplosion’ which opens with ambient keyboard drone lurching through 60s girl group melodies into big riff classic rock territory – the ideas fall thick and fast but all work as a whole. This again seems very much by design as Foster explains.

“It’s quite cinematic actually. That sounds quite pretentious but if you were to listen to it in one sitting, how it comes in with the first track and how it ends on the last it is a bit like opening credits and closing credits to a film. I just hope people stick with it because the last track is a twelve minute song, it’s a hard sell.”

In reality every song fits to form part of the bigger picture completing an album in the classic sense. But this ‘pretentious’ approach hasn’t removed the pure rock n roll ambitions at the heart of UQNB, this music is still accessible.

“For me it’s not an album for the modern way of releasing songs. But it’s not a 70-minute prog-rock beast, it’s a 35-minute record and you want to go from beginning to end.”

The concept of producing albums as a whole work of art is not the only “modern way” UQNB are side-stepping. The polish and shine of modern rock production is of no interest to this band. Classic rock records have rough edges and realism, and that is what Trashland aims to retain.

Foster has some things to say about mainstream modern rock, “If you listen to the Radio One Rock Show all those records sound like pop music, I can’t quite put my finger on it. They have polished off the rough edges, it’s a bit unnatural and you need a bit of that in there.

“I was listening to 6Music today and they were playing the Prophets of Rage stuff. It’s Rage Against the Machine which is one the best rock bands other last 25 years, Chuck D from Public Enemy who were just awesome but its produced like a modern rock record. It loses that edge. There’s a reason that people hold [Black] Sabbath and Led Zeppelin on an untouchable pedestal and it’s because you can never listen to those records and never get fatigued by listening to them. It’s not that there’s no production on them, they went into world class studios using amazing gear but at the heart it still sounds like those people blasting out those tunes and you just don’t get that from most modern rock music. It’s turgid, just the worst.”

And on Trashland, despite these rough edges, you can hear the ambition of both the songwriting and the production but there is a definite organic ‘band playing in a room’ vibe, that sets it apart from the current rock on the airways – in a good way.

This organic by design element means that everything translates perfectly to the live arena and has made UQNB one of the most engaging live rock bands to emerge in the last few years. This fact may come to wider recognition when they support Derby ska punk legends Lightyear on their reformation tour with national dates this month.

Chris explains, “We are touring with Lightyear and it’s quite a mismatch, well a complete mismatch, a hardcore/ska band and us. Their fans will probably hate us. We are as hard as any punk band when we play. But you just don’t know how they are going to take to it, it’s all up for grabs.”

And it certainly is ‘all up for grabs’ for a band who have crammed different eras into two years and have the ambition and skill to keep pushing their sound in new directions.

Unqualified Nurse Band are the band keeping rock simple whilst simultaneously throwing out the rulebook and in 2017 they are the kind of contradiction that rock needs.