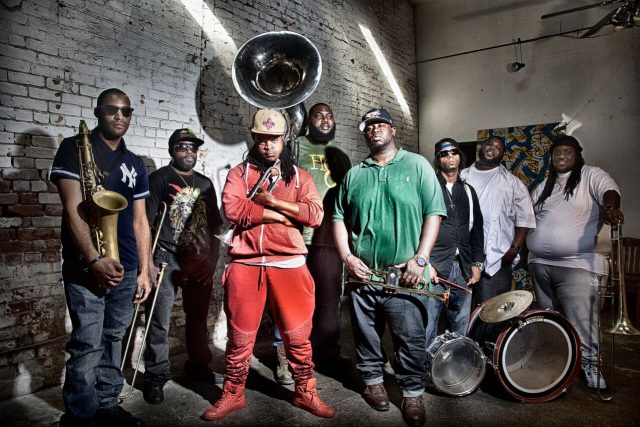 In a modern musical landscape that sees ‘authenticity’ as the ultimate standard, Hot 8 Brass Band should be viewed as one of the greatest bands in existence.

For 20 years, the Hot 8 have been putting a funky spin on the trials and tribulations of the dark heart of home-town New Orleans, projecting aural sunshine to the world.

From the traditions of second line parades, jazz funerals and parties in local jazz clubs, this is a band who have taken the sound of their community to clubs everywhere.

Such are the global aftershocks of their funky earthquake that their New Orleans street music has impacted the whole world, not least here in the UK, where their music is released by cult Brighton label Tru Thoughts and they have a swathe of influential fans like Craig Charles and Giles Peterson.

We caught up with founding member, sousaphone player and band leader Bennie “Big Peter” Pete  before the band took to the stage in Nottingham as part of a sell-out tour of UK venues and festivals.

The casual music fan might have encountered the band’s stunning cover of Marvin Gaye’s ‘Sexual Healing’ and know how great they are on record, but catching the Hot 8 live is something else – an explosion of pure joy.

On a recent trip to New Orleans, off Frenchman Street (a street packed with incredible musicians) the Hot 8 took the roof off and blew my mind.

“When people come see us , you know what they say? They say, ‘that was the best thing I ever did, I am so glad I saw you guys’,” laughs Pete.

New Orleans is a Mecca for musicians, the city of Louis Armstrong, Alan Toussiant and Professor Longhair, and a city where music is the beating heart. Nothing is quite like the New Orleans sound; rough, ready and real.

“We’re not the best of musicians, so it’s not about the musicianship or how hard you’ve studied, or what great technique y’all have, it’s way beyond that, it touches people deeper than that.

“In most music things are very standard, don’t miss a beat, don’t miss a note but with New Orleans music, the world’s not going to end if you play the wrong note. Sometimes you make the best pieces of a wrong note, because it all goes into what that artist is expressing,” he adds.

“The main ingredient is to just PLAY music, if some wants to stop and listen that’s just wonderful. You know, if I can get an audience to listen to me. It’s almost more of a way of life than something that you’re doing because you were taught it at school or something.”

“Every time a New Orleans artist puts it out there you know what he has been through, or is going through, because they put it in the music.”

And it is this ‘deeper’ that makes the Hot 8 so interesting, for all the life and joy in their music the underlying reality is that their music is a coping mechanism for a city (and nation) that is broken for much of their community.

The tourist spiel for NOLA suggests that it has risen from the devastation of Hurricane Katrina to be reborn, revitalised – it is a healed city of opportunity. But Bennie begs to differ, “When they say ‘everything’s OK’ that’s just something they want tourists and out of town people to buy into so they can come and spend money. New Orleans has always been like that. Just come down here, you can drink in the streets, live the life of Riley, eat good food and listen to good music. But the music is off the backs of the people who are struggling.”

And this goes a long way to explaining the ‘feel’ of the brass band (and other) music that emanates from the city. From the days of slavery to the modern day, it is an expression of survival and identity that captivates the listener.

“It’s a big, big part of just creating opportunity for people, especially people struggling. A big part of healing whatever brokenness, people going through trials and tribulations, uniting people, getting people to come together with the Second Line and things of that nature. They didn’t allow black people to have life insurance, so during those times in the earlier years in the history, music was a big part of fixing all those things. Letting people have an easy way to cope with living through it, just like today.”

And ‘today’ what ‘they’ don’t want to talk about is a city with a homeless problem, corrupt politicians, no jobs, a lack of medical services and, other than the tourist hotspots, areas where a decade on very little has been done to mend the wounds of Hurricane Katrina.

Whilst NOLA has always had its issues, it is still reeling from the devastation of 2005. The disaster still fuels part of what the band is about, and in a bitter-sweet moment of karma, is something that allowed the band to rise to further prominence. An appearance in Spike Lee’s acclaimed documentary When the Levees Broke: A Requiem in Four Acts shone a spotlight on their music and gave them legions of new fans.

Today, in the largely black areas of the city, the ones the Hot 8 represent, very little has changed. I myself took a drive into the main hit area the Ninth Ward, which still today resembles a damaged, ghost town.

“It’s got a real bad crime problem, the murder rate has reached sky-high and it’s all because people are broke and they don’t have job opportunities. Wages are at the bottom of the barrel. Health is a big issue, with all that good food all year round, no one is giving you nutrition tips and knowledge about what is good and what’s not, you’re just used to eating all that fatty food so the whole city has diabetes. Everybody going blind, everybody has heart problems. But in New Orleans you can drink all night and have fun, until you die.”

Talking about the problems in his beloved home town Bennie’s voice is cracked, and sounds a little dejected, which only increases as the subject turns to darker personal matters for the band.

The Hot 8 are no strangers to the ‘crime problem’, in particular the crime of murder by both criminals and the police, having lost three members in gun murders since 1996.

One killing in particular echoes a wider issue in American society right now, showing in the eyes of the law black lives don’t always matter.  In 2004, trombone player Joseph Williams was shot dead in the street by police. Eyewitnesses confirmed he was unarmed with his hands in the air.

“You can see it now, it’s not hidden no more. It’s crazy because what it’s saying is ‘yeah we are killing y’all’ and everybody can see it now. There are people who don’t want to talk about it, people who say he was ‘resisting arrest’ and they will bring all these things up before they say ‘this guy has lost his life’ and ‘you straight murdered him in cold blood’. Our trombone player was killed the same way, the whole community was outside and saw it happen, but they didn’t tape it because they didn’t expect it was going to happen. At the same time, if we are citizens and the community said ‘the police killed him’ the evidence was that he didn’t have weapons, he didn’t have drugs, he didn’t have anything but a cellphone and a trombone, he’s a known musician, common sense has to come in somewhere to say ‘how was he trying to kill the police’?

“He carries a cultural torch for us all over the world and he was murdered in cold blood. The shot him down fifteen, sixteen times. Now with the technology, people are more alert and they are pressing record early.”

The band reacted in the only way they know how, with positivity and music, releasing the stunning album Tombstone in 2013, a release that was largely dedicated to formed band members, living and dead.

For Bennie and the Hot 8 Brass Band what they do can be part of the message, the idea the ‘Black Lives Matter’, all lives matter and in a world that still attempts to pave over the blatant racism still apparent in our lives, their music is almost more important than ever.

Bennie is quite clear with his message on this: “Now America sees it and they ignore it. If it was happening to white people, it wouldn’t go down like that. And when judges kids are getting killed, or politicians kids getting gunned down, it wouldn’t carry on, it just wouldn’t happen.

“It’s up to us as citizens, black, white, yellow, purple to say ‘what we gonna do’.”

The Hot 8 Brass Band are one of the most real, authentic and genuine acts around, making music because it makes a real difference to their lives and the lives of others, and that is worth getting excited about.

If the positive politics and authenticity don’t do it for you, then there’s always the fact that these guys are funky as hell! They can make you forget all the bad things in the world as well as reminding you of them.

The band are back in the UK this week and it is about time you saw them live. Dates can be found here.