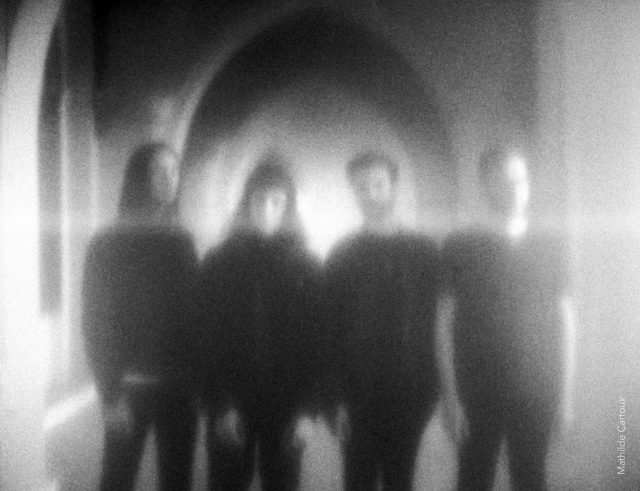 Expectation is a killer of creativity, it is the undoing of many bands. Delivering under the pressures of commercial interests or hit-chasing isn’t healthy, and it shows in the music!

French group BRUIT is the result of an untethering from expectations, embodying a sense of freedom from musicians cutting ties with major labels and diving into unconstrained creativity on their terms.

Sitting at the intersection of post-rock, ambient electronica and neo-classical music debut album The machine is burning and now everyone knows it could happen again establishes that sense of freedom and Clément Libes (bass, violin), Damien Gouzou (drums), Théophile Antolinos (guitar) and Luc Blanchot (cello) as one of the most dynamic new forces in the post-rock universe.

For the return of our ‘The fabric of’ series, BRUIT highlight the tracks that inform and inspire their sound.

Julien – Without this song, without this band, I might not have made all the most important encounters of my life. All the passion of this album also symbolizes the friendships I have and could have, passionate friendships: being real, arguing, loving, hating each other for 10 minutes, having fun, and laughing so hard you can pee yourself. Another band that you don’t cheat with, and that you feel alive with.

Théophile – After years of not being interested in rock, electric guitar and all that culture that seemed old and uninteresting to me, this band (who still claim to be doing rock and not post-rock) proved me wrong and got me into “rock” culture. It’s thanks to them that I can appreciate entire discographies of bands without which I would live much less well today.

Luc – This piece symbolizes the journey for me, the road trip with friends, I have this feeling that as soon as you put this piece in the car, the sun necessarily sets in front of you, warming your skin and your soul…

Clément – One of the first works of minimalist music for symphony orchestra. What is inspiring for me in this 20-minute work is the loss of temporal reference points that is characteristic of repetitive music, but also and above all the loss of sound reference points. Common notes pass from instrument to instrument and very quickly the brain does not know if it is listening to strings, brass, winds or percussion. The orchestra thus becomes a sound matter that evolves rather than a gathering of instrumentalists with well-defined timbres. This is an approach that particularly inspires us.

Julien – It’s hard to find a song stronger than the others among my favourites of this band. They encompass everything I can love about music: madness, mastery, purity, borderline, wild, sharp, touching… They have it all. And the enumeration of qualifiers I just made is valid for the drum part of this band which is as massive as mastered, Thomas Pridgen made me want to explore my whole drum kit, to smash it too, as well as to pamper it.

This Will Destroy You – Little Smoke

Théophile – If I had to listen to only one band, one album or even one song for the rest of my life it would be this one. Most of what I believe today about the evolution of the history of music, of rock, of sound in general is based on this album. Without Little Smoke, BRUIT would not be the band it is today.

Luc – I have affection for songs because of the memories or emotions they brought me in specific moments of my life, even if they are not the best songs in the world. This song reminds me of an afternoon in Central Park with my ex-girlfriend, a moment out of time where we let ourselves dream, fireflies were flying around us when the sun had set, it was incredible.

And finally, something else to explore from BRUIT themselves…