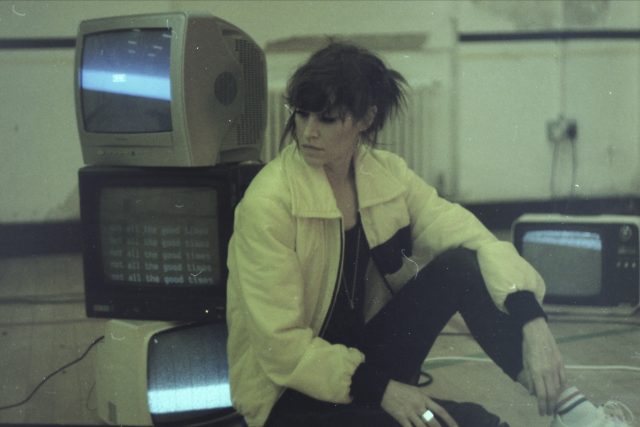 If we consider 2020 a write-off, it’s only been a few months since we did one of these new music columns! Yes, let’s go with that.

Anyway, this is now and now is good – music-wise at least. Maybe ignore the burning police cars for a moment…

This is a mix of some of the incredible new music helping us make sense of the world right now, or confusing us further – we don’t know any more.

Julia-Sophie – and you know it

Some artists emerge as if they have always been around. Anglo-French avant-pop creator Julia-Sophie is one of those. 2020’s EP ‘y?’ featured many tracks on yearly best-ofs, and gained national radio spins with no management or label!

‘and you know it’, following the first single ‘I Wish’ is a precursor to forthcoming EP ‘</3’ (out next month) and a sarcastic, slightly bitter swipe at heartbreak. A classic pop song drowning in spectral vocals and experimental electronics, it shows an ever-evolving artist exploring their own boundaries.

Oli Heffernan is an avant-rock wizard! How else do you explain the sheer amount of quality albums he releases as Ivan The Tolerable (and his many other guises) each year? So many that people can’t keep track…

‘Gold Hat’ is the lead single for White Tears coming on the excellent Library of the Occult label on 2nd April. Through Heffernan’s ever-revolving door of collaborators for this eight-minute blend of Kosmiche synths and floating cosmic jazz is The Unit Ama’s Christian Alderson on drums, Benefits’ Robbie Major manning the arpeggiator and Ben Hopkinson on saxophone.

It’s a psychedelic trip and a hypnotic collision of Miles Davies at his most expansive, Mort Garson and Neu! Start here and explore Ivan the Tolerable’s expansive and extensive aural galaxy.

Hawaii’s Lionel Boy brings a touch of sunshine to this wonky, electronified take on slacker pop. ‘Flower Girl’ is a glimpse at his debut coming on Innovative Leisure. It’s like basking in the haze of mid-summer heat, pondering life and love. Who doesn’t need that right now?

The opening portion of ‘Padding’ dives into minimal, industrial electronics and could be seen as an obvious nod to Squid’s now permanent home with Warp records, but it soon dissipates to reveal the band’s penchant for skronky post-punk adventuring. That surreal funk, no wave concoction that has made them intriguing leading up to their debut album. Yeah, as always this is good.

At times, ‘All Things’ so sparse it appears to be opening up a void. It’s an ethereal narrative about Salomon’s own mental health. Dark subject matter tinged with captivating beauty.

The fragility of her voice is lifted to a powerful place by chaotic synths and near-spiritual organ. This second single suggests an artist carving a distinct space.

Hall’s 2020 wonk-pop epic My Big Album was one of the year’s most interesting debuts, a bedroom album crafted over four years and recalling everyone from Randy Newman and Jonathan Richman to LCD Soundsystem.

This return is another slice of kinetic upbeat electro-pop with a deep core of classic songwriting and it’s for charity in his Derby hometown, which is nice.

If you Google ‘Enumclaw’ the first results you get are Native American mythology about two brothers transformed into thunder and lightening (one called Enumclaw) and a link to something called the ‘Enumclaw Horse Sex Case’. This is all fascinating but nothing to do with Tacoma, Washington band Enumclaw. They are a good band!

“The best band since Oasis”, their Facebook page sarcastically suggests. They are nothing like the Manc scallies. ‘Fast N All’ takes a fuzzy, early 90s slacker rock aesthetic that Dinosaur Jnr. fans wouldn’t be upset by. Yeah, good stuff.

Voice is a new weapon in Berlin-based, Peruvian producer Sofia Kourtesis’ sonic arsenal and on ‘La Perla’ it opens up a whole new dimension to her music. In fact, the subtle Spanish vocals echo like they are being sung across a rift in time!

Other vocal layers add further depth to the organic, Latin-tinged downbeat instrumentation. This is global techno from multiple worlds, and leads is a cornerstone of the new EP ‘Fresa Magdelena’ out via Ninja Tune imprint Technicolour.

Tkay Maidza – Where is My Mind?

You have to be fairly confident to take a stab at covering Pixies! So many have done it badly, but not Tkay Maidza. The fractured, synth-driven update forces the alt-rock classic into new territory without, somehow, losing any of the wonder of the original.

This cover forms part of 4AD’s 40th-anniversary compilation Bills & Aches & Blues which sees label acts like The Breeders, Dry Cleaning, Jenny Hval and Aldous Harding take on classics from the labels past.

Bureau B is releasing two career-spanning compilations of this cult Swiss collective, made up of real and imaginary members. OK, who are they then? The name translates to “The World Dream Explorers” which is apt for music that treads a line between reality and a strange dream.

They had 32 album releases between 1981 and 2012. They call their music “Bretzelberg pop” named after an imaginary 1960s comic book kingdom and it references a vast array of strange pop influences like Can, Kraftwerk, Massive Attack and The Residents.

It’s a weird world to explore but so worth it…

Seminal South African underground heroes Blk Jks are returning with their first new record in over a decade, A Bantu/Before Humans. The lead single from that album (coming in May) shows that the band hasn’t lost any of its vibrant power on hiatus.

Again there is an upbeat clash of spiritual jazz, dark funk, dub and resistance rock mixed with kwaito. ‘Running’ is propelled by a juggernaut Afrobeat groove, taken into alt-rock territories and lifted by powerful brass.

Roy – Where Did My Mind Go?

Toronto artist Roy’s new single is the kinda music rose-tinted nostalgia would tell you the late-60s was like, a facsimile of the fashions and sounds. This is no bad thing. ‘Where Did My Mind Go?’ is a distillation of those Pebbles compilations of rare psych cuts. There’s echoes of 13th Floor Elevator’s oscillations, the strange whimsy of The West Coast Experimental Pop Band and Brian Wilson-esque vocal symphonies.

It’s one to lay back and zone out in whatever way you see fit. We. Won’t. Judge.

Jilk – Pause the Clocks for Women in Love

I first discovered Jilk through their split single with Haiku Salut and since they have enthralled with their electro-acoustic blending of ambient and post-rock. Eno reworking A Silver Mt Zion – maybe. They released possibly their best album to date recently via Castle In Space’s Subscription Service (so you can’t get it).

This track is from that and it is majestic. Jilk should be a hugely respected act. The world is weird sometimes.

The legends at Outre, recently brought Lyon-based Hidden People’s 2018 album Tambour Cloche over for UK release and it is another stunning artefact from DIY-collective/label Dur Et Doux’s insane roster.

‘Dirty Trick’ illustrates the duo’s strange, almost sarcastic, expectation-defying sound. Crafted from cello, banjo, drums, a synth, a sampler and two voices this is minimal, rhythmic music that sits uneasily but is compelling. Intrigued? You should be…

It transpires Tomaga is consistently one of the most interesting groups in the UK. This is a shame because member Tom Relleen passed away in summer 2020, meaning I discovered this fact too late.

Their forthcoming, parting album Intimate Intensity is exceptional. It is like Frances Bebey playing the music of Can – yes, seriously. It has an echoed, electronic edge as well.
As a teaser for that, Floating Points has reworked the title track which his own charm.

‘Wide Boys’ is the first offering from Sink Ya Teeth member Gemma Collingford’s forthcoming solo album on Outre (yes those guys again). As expected this is a MASSIVE electronic pop banger that is as good as any of her previous work.