Essentially a passion project that got out of hand, this is a movie that acts as a testament to Thorpe’s skill as an animator, writer and director but also to perseverance. Initially intended as a short, the crowdfunding campaign, given the quality of initial scenes, drew in a cast of actors that required a feature length effort – Reece Shearsmith and Jonathan Rigby both appear, and Julian Sands takes on narration duties.

The documentary unravels the famed paranormal investigator Harry Price who is employed by journalist VC Wall to research the strange events at a Victorian mansion in Essex. Their discoveries made the Rectory world famous as “the most haunted house in England.”

Four years of personal, painstaking animation work from Thorpe has yielded stunning, visual results. Created using a blend of rotoscope and digital animation this is essentially an animated documentary with glimmers of reality shining through the cracks. The original pitch of it being ‘an ultrasound of a haunting’ is an apt description of the visual style, as it brings old black and white photographs to life like viewing echoes in time. Archly old fashioned, black and white and highly stylised few cinematic efforts have brought the past to life in such an inventive way.

Running to a feature-length documentary the story around the Rectory is stretch a little thin and, in reality, should have been packed into a short for more impact, but the visual journey and brilliant performances from the cast carry it well-enough for this to rarely matter. Following the film’s end, the actual story is less interesting than the artistic delivery.

Coming from the lighter end of the horror spectrum this is an accessible paranormal adventure that has been delivered in an innovative way.

Borley Rectory is a personal creative project that through sheer skill and determination has gained the attention and support it deserves. And it also deserves to be a success with a wider release. 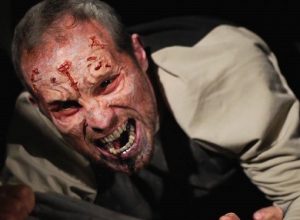