Experimental DJs Copper Sounds talk about their part on an innovative new tour.

Sound is a powerful thing, it has the power to ignite, manipulate and inspire. So much music is created with simple distraction or entertainment in mind, but there is also those working to expand music, experimenting with its conceptual core.

A new tour from musician and producer Beatrice Dillon, and artist Keith Harrison, ably supported by Copper Sounds will explore objects, and our own, relationship to sound in unique new ways.

Dillon and Harrison will create an experience with a playdoh pumping soundsystem and sound synthesis in a live experiment with sound and substance. Conducted through a modular system comprising of malleable materials, light and multi-channel audio, all manipulated by the artists in the performance space.

As an experimental record manufacturer, Copper Sounds, are the perfect opening act for this experience. Live they DJ with copper dubplates, ceramic pots and Icelandic rocks to create soundscapes from otherwise dormant sounds – unlocking the primal beats of the objects they use.

As part of the tour, they will also be leading a daytime workshop where attendees can design and cast their own playable wax 7-inch record.

Before the tour gets underway Copper Sounds spoke to Bloop about their part on the tour, the work they do and what it brings to audiences.

How would you describe what you do? And why do you do it?

We would describe what we do as primitive and tactile turntablism. Our record collection consists of copper dubplates, ceramic pots, heavy Icelandic rocks and self-pressed locked grooves. The rhythms and collisions we orchestrate are further manipulated with homemade FX and reverb units. Why do we do it? Basically, we like to hang out and make stuff together and we like the challenge of trying to make ambitious objects and installations. Also, the unknown: we don’t know how things are going to turn out, it’s like an unruly beast we will never tame and if we think it is getting tamed we make it feral again.

What attracted you to the tour with Beatrice Dillon and Keith Harrison?

Being part of the tour came about through Al Cameron who is involved in organising the tour. We are part of a collective called CHAMP who have studios at the Brunswick Club in Bristol where Al is also part of a collective called BEEF, he has seen us play a load of times and knows what we’re all about so must have thought we fitted the bill. We are big fans of Keith’s work and we have areas of interest that cross over, the most obvious being his experimental approach to clay and sound. Equally, we are a fan of Beatrice and have a few of her records, so when we heard they were collaborating, and we could be part of the tour we jumped at the opportunity.

How would you say you fit in with the concept of the tour?

I think we fit into the tour nicely with our experimental approach, investigation of materials and the physical presence of our live set; smashing out big sounds. It’s great to be part of something that is crossing over so many disciplines, that being live performance, sculpture, sound and music.

What do these kinds of experiments achieve?

The experiments we conduct help us learn a little more each time about the materials we are using, how to use those materials to achieve new sounds and how to layer those sounds to create an experience that we hope takes the audience to a new place.

Is it a concept of showing that everything has an underlying sound, music hidden within?

What inspires what you do?

Everything and anything. We are inspired by the challenge’s we set ourselves but in terms of who and how we are inspired it is a big old mixing pot from repetitive noises to dancing windscreen wipers.

Where would you say, once recorded, your music sits? What genre do you consider yourself to be in?

We would like to think we are eclectic selectors and we play many genres from Icelandic rock to heavy metal to pot music. When all these elements are mixed together it is an industrial sound. But, to be honest most of our recorded music sits in a box, in our studio, unsold.

Would you say that sometimes the underlying concept of what you do overshadows the music?

We hope not. The concept and the music are the same thing because the concept is making music, a bit of the old chicken and egg conundrum there.

Beatrice and Keith’s show will have assistance from the crowd, and you are running workshops on the day – how important is it to bring the audience into shows like this?

It’s great to interact with people about what we have learnt and demonstrate the principles of what interests and inspires us through making stuff. Hopefully, people enjoy and gain something through what we do in our workshops and if you’re happy to explore things as experiments there is no fear of doing it ‘wrong’; you can only learn.

What does including the audience bring?

For us including the audience usually means meeting new people who know and are interested in similar things, often people are suggesting new things to look at or investigate. In this case, the workshop we are hosting as part of the tour means we will produce an album made up of 120 unique wax dubplates, each owned by the person who cut it.

Catch Copper Sounds on tour with Beatrice Dillon and Keith Harrison at: 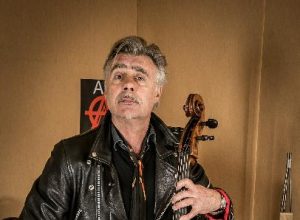