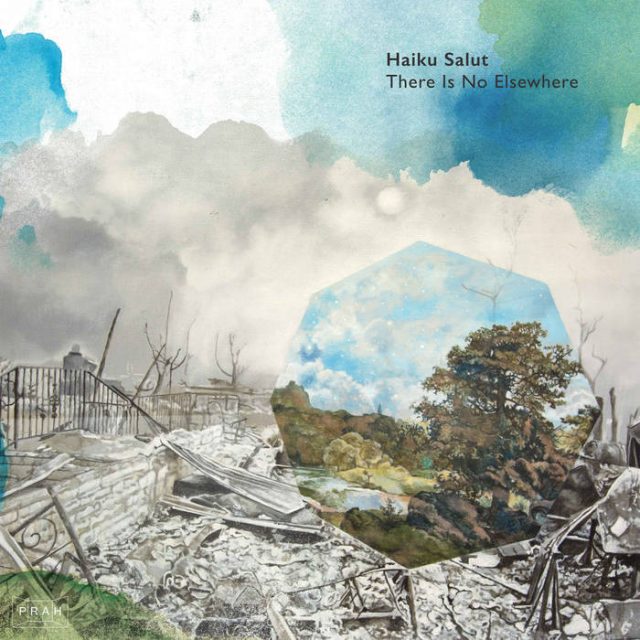 Evoking narrative, and a sense of place, through sound is a skill often most recognised in the worlds of jazz and classical music – think Moondog’s sounds of New York or Sun Ra’s music of the cosmos. But this is a skill that Derbyshire “ruraltronica” trio Haiku Salut has always eluded too.

With third album There Is No Elsewhere, they have achieved this and perfected their aural storytelling. While 2015’s Etch And Etch Deep expanded the sonic palate of debut Tricolore with further ‘laptopery’, this third effort is a remarkable jump forward.

More than ever their sound paints a picture of the classic rural idyll colliding with the technology of today (and tomorrow) – like a classic Constable landscape viewed through an iPad.

None of the organic elements (live drums, accordion, guitar and glockenspiel) that have given the band so much charm in the past, are missing, but the ‘tronica is now in full force, washing over the “folk” elements without completely obscuring them. There is a beautiful harmony to the band’s disparate elements as they begin to evoke dark techno dancefloors as much as they do village fetes.

As opener (and first single) ‘Cold To Crack The Stones’ bubbles and fizzles into life, it is immediately apparent that this record is Haiku Salut’s next step in evolution. Its lulling electronica is buoyed by the first of two appearances from Glastonbury Brass giving it a triumphant nostalgic tone. The second single, ‘The More and Moreness’ is the second Brass-infused track and is a stunning standout as the trio master every element they add. Live drums, echoed vocal samples and surging techno synth-lines collide with accordion and brass.

But There is No Elsewhere, unlike past efforts, doesn’t paint images of other worlds, it is placed firmly in our reality and is a deeply political record at its core. With no lyrics it evokes political ideas simply through its sonic explorations. As the band’s Sophie Barkerwood said, “It is an album about occupying your space, being proud of what you believe in and who you are.”

Guesting on the last Public Service Broadcasting album on a tune based around the political awakening among women’s support groups in South Wales during the 1985/85 miner’s strike, possibly opened up this thread in Haiku’s thinking and expression. Regardless, this exploration of ‘issues’ is confidently achieved, and without the bedrock of samples adopted by PSB, it could be argued, it is achieved with much more skill.

Take the majestic ‘Occupy’, for example, with a kinetic electronic chime (supplemented by glockenspiel) that evokes a sense of running, or marching, and a club-ready synth surge that is the sound if pure power, it’s the sound of a considered revolution – personal or otherwise.

Elsewhere, the band explore their own aural template even further. ‘For Twinklr’ with its echoed choir samples and sedate chimes is a reassuring aural sedative, while ‘Bow Wood’ combines Max Richter’s nocturnal, neo-classic vibes with the bubbling electronics of Múm to heart-breaking effect. A similar vibe permeates from ‘Choke Points’, a simple lament of piano and accordion that eventually collapses in on itself in an explosion of electronic beats and guitar lines.

‘We Are All Matter’ is an obvious third single as a dancefloor ‘banger’ (well in the world of Haiku Salut anyway) and ‘Nettles’ is the clearest indication of the new “laptopery” infiltrating the old Haiku sound.

At over seven minutes of pure wonder, ‘I Am Who I Remind You Of’ utilises vocal samples in a manner not heard from the band before and it is a worthwhile development. This new confidence in accessing all the talents and tools available to them only points at even bigger wonders to come.

The album closes with ‘Shadows’, which sounds like an aural message from the past, leaving the record on a justifiably serene vibe.

There Is No Elsewhere is a rare record from a band that has created their own musical planet to inhabit, but one that means so much to the wider world. Stepping out from their cult status, Haiku Salut now has every right to be mentioned in the same breath as the best of their electronic contemporaries.

Haiku Salut makes music for the world I want to live in.