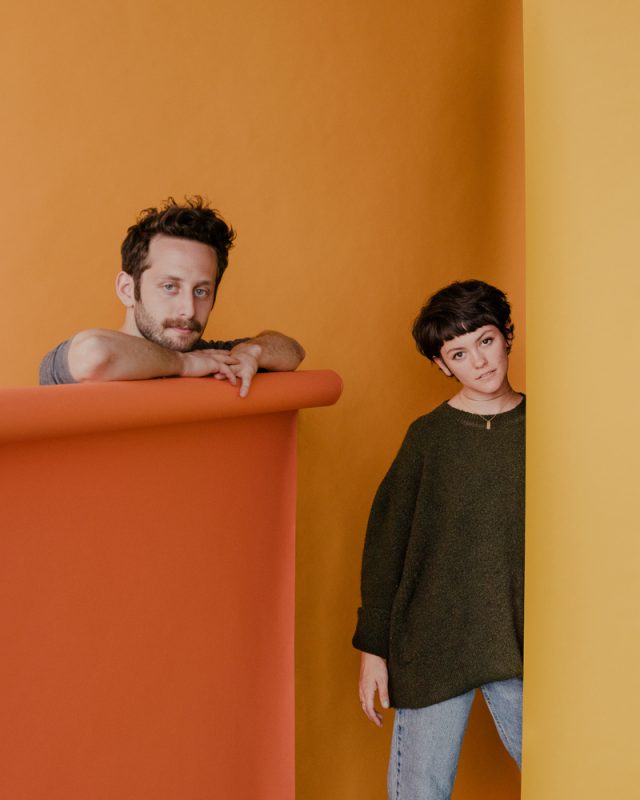 We’re sat in the upper floors of the labyrinthine Hare and Hounds in King’s Heath and ‘slop pop’ duo Diet Cig are enthusing about their first visit to a Toby carvery, a “big landmark that everyone’s been going on about.”

Seven weeks into a tour the pair are still full of energy and enthusiasm, a trait that anyone who has been won over by their bitter sweet pop punk jams would recognise – this is what makes them such a vital and endearing band.

Today they form part of an important line-up of radical, DIY punk at All Year’s Leaving festival alongside Downtown Boys, Priests and Idles.

But even in that that of like-minded bands, Diet Cig stand out as different. While they bring the same progressive ideals and messages to listeners theirs is the light in a sea of darkness – Diet Cig are the radical punk party band we’ve been needing.

A band for just two years Alex Luciano and Noah Bowman came together over a cigarette at a house party in New Paltz, New York, starting life with a PR ready story and setting them up for the blinding rate of success they have enjoyed to date.

The wonderful, confessional and personal pop punk songs on their debut full length album Swear I’m Good At This (arguably one of the albums of the year), paints only part of the picture. Almost constantly on tour the band are winning hearts and minds with their uber-energetic live shows and likeable personalities. With a clear love of what they do they are easy to love back.

“I think what we do is fairly straight-forward. It’s just really fun. We take what we do seriously but we don’t really take ourselves too seriously. We just want to have fun and provide a safe-space for other people to have fun,” explains Alex.

Noah adds, “I think we’re just a fun, energetic band that’s there to make people forget the shitty things that are going on.”

For me, ‘fun’ is the central adjective in describing the work of Diet Cig but that fact doesn’t diminish that there are also many important messages and issue to unpack in their music. But rather than taking an abstract, political or universal approach issues Alex takes a more personal line drawing on ‘lived experiences’ putting issues into a real human context. But how much of this comes from her directly?

Alex is direct and honest in answering this question, “Everything, oh my gosh. Every song is very personal and has something to do with my own lived experience and I find it easiest to write what I know, especially on this new record that we put out I was getting really emotional with myself and packing that into songs that could be fun or cathartic.

“Our song ‘Sixteen’ I talk about having sex with someone with my own name, so that was kinda an awkward share when the first time I played it and my family was in the audience at the show. That was definitely a bit OH MY GOD. My little sister listened to the record, she’s thirteen almost fourteen, and she’s like, ‘mom do you know Alex’s song is about having sex’ and she was like ‘yeah’. She’s in middle school so she thinks it’s hilarious. So that was a funny share but I never felt it was to personal. I don’t think I would write it in a song if it was ‘too personal’.”

Even with the complete confessional nature of the lyrics, those writing about the band have sought to add additional narratives to the story of Diet Cig – such is the lot of female artists (or acts with female members) even in 2017! From the early days journalists have tried to sensationalise their relationship – are they a couple, are they siblings? It must be impossible for them to just be in a band together, right?

But Diet Cig are not a band to tolerate this bullshit for long, as Alex explains, “I think we’ve called out enough journalists and said, ‘don’t fucking even ask us that, are you joking?’ People don’t even ask us that anymore. When we started people would ask us ‘are you dating?’ I would say ‘Fuck. You.’

It’s ‘over-easy’ in case you were wondering.

They want to talk about the music, I want to talk about the music, but it is the unfortunate reality that in the wake of Weinstein, #metoo and the on-going work groups like Girls Against have to do, it is obvious that the arts is not gender equal. Alex acknowledges it is important to keep addressing these issues, even if it does sometimes detract from the art itself.

“I think gender is important and it plays a big role in people’s music. I mean, I am a woman and it’s a weird catch 22 because I don’t want people to only see me as my gender and ask about that but I don’t want to not be acknowledged that I am a woman and I have a different experience than like a cis man in the music industry. So it’s a balance of acknowledging it and not completely writing it off but it’s also important to treat people with respect regardless of their gender, obviously, and not tokenise people because of their gender. There’s a way of discussing gender in the media without totally tokenising the person you are discussing it with and I think that is really important.

“Journalists always want to build this arc around the identity of the artist. So it’s like ‘oh you’re a girl, so you have these bigger hardships and they come through in your music’. It’s like, yeah, OK I guess so but does your whole article have to be about that.”

Back to the music! It is becoming a well-established fact that the best way to experience Diet Cig is live. This would be proven by their set an hour later in which they won over every single person in the crowd. Alex is tiring to watch as she bounces, high kicks, twirls and dances non-stop throughout, always with a massive grin on her face and talking with such positivity and love in between songs that it’s hard to dislike what they do. Noah, keeping time at his kit, is also having a blast alongside his duck (more on that in a moment.)

Like all good bands they give more, the more the crowd gives back – it’s a communal experience. But they have found some audiences in Europe to be a little confusing on this recent tour.

“I think the whole vibe in Germany is that everyone is very serious or very straight forward so a lot of crowds were just very respectful and appreciating the music. We had one show where I was, like, the crowd really aren’t in to it. But tonnes of people afterwards were like ‘that was so great, blah blah blah’. I was like ‘really?’ I saw you at the front and you were just looking at me for the whole show,” says Alex.

Noah interjects with how they combat this lack of emotional response from some quarters of the crowd.

“There’s always a couple or a group that are just so into the music so we lock in with them. I also have a little duck on my hi-hat so if I start to zone out I just stare at the duck.”

Alex finishes, “There’s always someone in the crowd that is having a blast that I can focus on and then I am like ‘I am doing this for you, because you rock!’.”

The band had no such issues at their recent gig for Fanclub at Rough Trade in Nottingham with Spook School.

“First off the city is really beautiful and we played at Rough Trade and it was awesome. It was so fun, and the people who run Fanclub were so sweet and cool and they put on such a great gig. It was the nicest vibe. We were glitterising everyone and they had confetti cannons at the end and we got to stay with them. It was such a good energy surrounding the whole day,” explains Alex.

It’s these nights that keep them going and shows them how lucky they are to be able to share their good vibes with the world.

“We love it! There are definitely times when we think ‘what are we doing?’ We are so tired. But when you get to the venue and the gig it’s just, like, good. Once we step on the stage it just hits us,” says Noah.

This love for everything they do definitely bled into the wonderful new album, but, after enthusing about emojis, the band share an unlikely factor in the creating of the record – cats. The studio was packed with feline friends who brought support, good vibes and ‘magic’ to the recording process.

“It’s just nice because you’d finish something and there would be a cat there seeing what’s going on,” explains Noah, but it is Alex who the furry muses clearly had the most impact on.

“I feel their purring is on the record somewhere, they were there constantly,” she says continuing, “There is no way to describe them. They are just these ethereal beings that might not even be cats, they are so strange. They are little angels with furry bodies that would come to you when you needed them. They were weird, they were great.”

Constantly on the move the duo have yet another tour with dates in the US and some festivals before ‘hankering down and thinking about our next record and then start writing it, and get that train rolling.’ This will provide many new opportunities to engage with the loving, unifying, ‘slop pop’ manifesto of rock’s most-fun, current band.

The only sensible thing to do is embrace them.