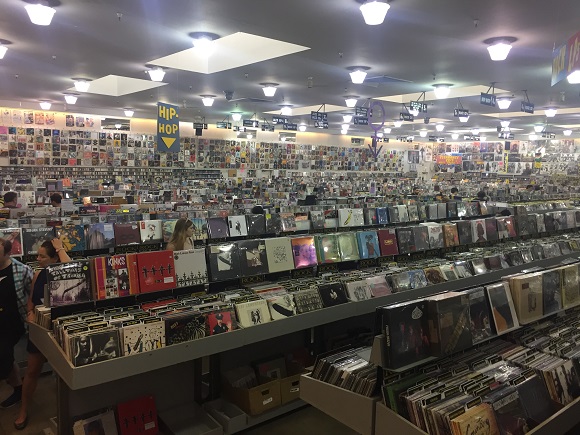 The city gave birth to movements that changed the world, here’s how to explore them on your visit.

San Francisco is a city oozing with cool – a hotbed of culture, culinary delights and innovation.

But despite its current status as a technological hub and hipster epicentre it is not this aspect of the city that draws many travellers into its limits. For many, myself included, it is the echoes of San Fran’s countercultural past and the romanticism attached that is a major draw.

The ideas and art that emerged from the Beat poets and the hippy’s Summer of Love changed the world for ever. Much of the city’s modern cultural identity is built on the foundations of these eras and for those interested there is much of these vibrant times to explore.

The post-war Beat movement forged a new vision of American popular culture with a new way of documenting the world. The reverberations of this movement, along with blues and rock n roll formed a major part of the world changing counterculture of the 60s.

Although Beat was not started in the city in many ways San Francisco was the beating heart of this movement. Exploring the haunts of the Beat generation is an afternoon well spent.

On our visit we walked from our hotel in the Union Square area of the city, through the bustling excitement of China Town to Jack Kerouac Alley where a short walk down the alley will open up your Beat walking tour.

Dedicated to the late writer, on the China Town side of the alley you’ll find a street sign which provides a great photo opportunity. The floor and the walls of the alley itself are adorned with a number of plaques and artworks, most of which are about the Beats, again making good photo ops.

Emerging on to the road on the other site you stand directly between two Beat landmarks of note. Vesuvio’s is a bar that literally oozes history and character as a place frequented by many heavy-drinking beats. Inside it is like a time capsule back to the time that Beats drank and debated the night away. It is noted that Jack Kerouac spent many nights at the bar.

Next door is the legendary City Lights book store which even today is a multi-floor monument to the written word and subversive thought. It feels like the kind of store that new ideas are formed and the world can be changed.

You get a real sense of it as a meeting place for the meets. Founded by Beat poet Lawrence Ferlinghetti in 1953, it was also responsible for the publication of Allen Ginsberg’s infamous poem “HOWL,” which was the subject of a much-publicized obscenity trial in the 1950s.

It retains its progressive, occasionally anarchic values but adds modern offerings and also Beat memorabilia on its shelves. It also acts as a miniature museum for the movement it was at the centre of.

Heading up hill walk towards the Beat Museum to get some real insight into the scene you are exploring. As an avid follower of countercultural history I found this museum well curated and insightful adding a new level of understanding to the sites visited.

A formal walking tour can also be booked from the museum to add context to the tour from real experts, or simply continue this walk on your own and tread your own path – just like the Beats.

Leaving the Beat Museum head for a coffee at another classic Beat haunt Caffe Trieste. En route look upwards at the crossroads of Broadway and Columbus Avenues to see the Language of the Birds, a flock of 23 illuminated flying books (this is obviously better in the evening, maybe head back that way as the night draws in). There are also words and phrases scrawled on the plaza floor as if they have fallen from the flying pages. The cultural vibrancy of the area is illustrated by the text being in Italian, English and Chinese.

Caffe Trieste itself is quaint and largely unchanged since the days figures like Kerouac and Ginsberg frequented it and formulated some of their best works while supping coffee. In to more recent times it is rumoured that Francis Ford Coppola wrote much of The Godfather in there.

It really is the perfect spot to grab a classic Italian-style espresso, as the café is said to be the first true espresso bar to appear on the West Coast. Enjoy the authentic taste of Italian coffee and soak in the atmosphere that classic writers loved so much. It is worth seeing if you can find some authentic scrawling from real Beat poets in the corner.

For food head to one of the many authentic Italian restaurants – it is a largely Italian area by tradition and it’s worth taking advantage of that.

After some food there are still some Beat-related bars to visit before the day is through. Across the street from Vesuvio’s there is Spec’s, a dive bar (that has been everything from a speakeasy to a lesbian bar) that is more famous for attracting characters and a colourful history than being quality. It’s a proper locals bar with cheap drinks and lively atmosphere.

It’s worth ending up in the city’s third oldest bar Tosca, a classy old-fashioned bar which after the Beats drew a celebrity clientele such as Sean Penn, who saved it in the mid-2000s. It is said the menu ‘to-die-for’ and you should end the night with a House Cappucino (steamed hot chocolate with brandy). On our brief visit the place was heaving and is renowned for wild nights, so sticking around could be a good move.

Explore the centre of the hippie movement

A decade or so after the Beats something else stirred in San Fran, something that imprinted a liberal freeness that can still be felt in the city today.

This countercultural explosion happened when musicians, artists, writers and activists converged at the epicentre of Haight-Ashbury seeking to create a new way of life. By 1967, 100,000 young people from all over the US had gathered for the ‘summer of love’.

Today there is still much to explore in the Haight-Ashbury area. It is a bohemian area packed with interesting shops and bars and a real buzz.

Every trip to the area should begin with visit to the rather unassuming crossroads that gave the area its name. Without knowledge of the era it could be any other street corner, but with the street signs it is a perfect picture opportunity.

Over on Ashbury Street the Grateful Dead House is the site of where five pivotal players on the San Francisco music scene lived and started a revolution. In many ways it is now ‘just a house’ but to take a few minutes to visit a place of cultural significance it is well worth it.

Other similar sites are that of Jefferson Airplane’s mansion and the site of the original Psychedelic Shop.

If music is your thing, head over to Amoeba Records is a record-buyers Nirvana. It is colossal in size with everything from vinyl and CDs to books and merchandise. If you are willing to search there are bargains to be had – I picked up a prog record by Ten Years After and an LP by Motown rock group Rare Earth both for under $2 each.

The area is brilliant for shopping with everything from independent clothing boutiques to alternative bookshops. If books are your thing head to Booksmith an independent book shop that has the areas countercultural vibe flowing through it. They host non-profit events and readings, and offer a lot of reading materials in a chilled-out environment.

Heading from Amoeba Records you can head into Golden Gate Park, the vast park that the hippies made their playground. There is a day’s (or more’s) worth of exploring in here but in keeping with the Summer of Love theme you can visit Hippie Hill (a famed gathering place for hippies) and the Janis Joplin Tree, which is rumoured to be the late singers favoured spot.

To the east of the Haight you can head to Alamo Square to see the famed row of houses called the Painted Ladies which is the ultimate San Fran picture postcard shop and an Instagram favourite.

If heading for a drink in the Haight, I found the beer at the Magnolia Gastropub and Brewery one of the city’s brilliant brewpubs.

You could also try Molotov’s a dive bar on the more affordable side (for San Fran anyway) that offers a huge range of spirits and a very chilled-out, local vibe. It also have a great jukebox. Nic Noc is as strange and psychedelic as bars come, like walking into an art cave or a fairy tale from the mind of Hunter S. Thompson – they have a good beer selection but only have wine or sake as another option.

If beer is your thing, Toronado is a must. It’s selection of beers is well known and it is a place where they take beer seriously. Expect funny looks if you order a Bud, this is not the place for mediocre beer.

This is just a taste of what you can explore of San Fran’s countercultural past and there is so much more to discover and experience in the city.

Exploring sites that connect Tallinn’s oppressed past with its glimmering, creative future