Kenya has long musical heritage connecting the traditions of the past with the ever changing social and political climates. Its forays into the world of “pop” music began in the 1930s, intensified with the pre-independence years in the 1960s and now maintains its traditions while drawing on the worldwide sounds of the 21st century.

At the country’s heart is Nairobi, a city of noise, creativity, passion and home to collections of incredible music from across the continent.

On visiting Nairobi, it is nigh on impossible not to fall into some kind of wild DJ set, soft jazz session or overhear the freshest hip hop beats from the ghetto. With so much to discover, a little planning never hurt no-one.

This short guide will help unlock the musical secrets of Nairobi and start your journey to soak up the best music that East Africa has to offer.

Constantly adapting to the modern world, Nairobi’s relationship with music has spawned a clubbing scene, boosted by a growing increase of electronic music that is gaining a reputation for music-driven nights out.

Arguably one of Nairobi’s best nights out can be found in Westlands – nestled into a small creative arts space. Alchemist Bar is the perfect hangout for lovers of deep reggae and dub fusion, Afro-bashment and authentic basslines. As a stronghold of the Umojah Sound System, it’s one of the best places in Nairobi to experience the East African reggae scene and relax amongst likeminded music lovers.

As the suits leave the district for the day, the central business district (CBD) really comes into its own. Club Tribeka sits smack bang in the centre, opening its arms to all-nighters looking to paint the town red right through to the early hours.

With themed nights seven days a week, 365 days a year, Tribeka keeps its tunes fresh and fiery. Big names like Sauti Sol frequent the joint to drop their latest chart-topping hits, while brand new DJs are given a chance to test their mixes on a mature crowd. Comprising of a restaurant, bar, terrace and VIP area, the club feels spacious despite filling up on Friday and Saturday nights.

Jazz has carved its own space in Nairobian culture and oozes through the capital city in cosy cocktail bars and pubs.

If you venture into the more tourist-friendly side of town, Parklands is a great area to sort out an impromptu evening of tunes. I spent a year practically living in different Art Caffe restaurants around the city, but the one nestled into the peaceful neighbourhood in Parklands has a little spark of its own. Showcasing the best live jazz and blues bands every Wednesday, spicy Salsa beats on Fridays, and the occasional acoustic night for fresh new Kenyan talent, Art Caffe is a hub of musical activity.

Staying in the Parklands area, K1 Klub House has a vibe straight out of East London. With a wide array of street food vendors and an entire flea market circling the bar, K1 offers visitors the chance to eat, drink, shop, and chill out to some authentic beats.

Themed nights range from rock to pop, reggae to ska, and attract a much younger audience than some other live music venues across the city. It’s great for affordable street food and a late afternoon bop to old reggae classics. 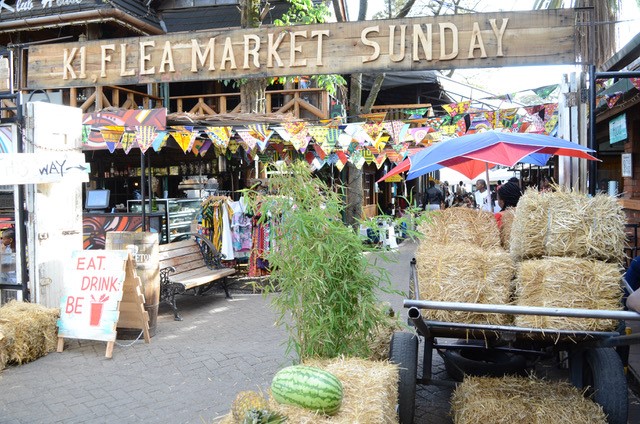 Nairobi has a tumultuous history with music production; record companies and production houses lived fruitfully throughout the 1950s, 60s and 70s, but took a heavy hit running into the early 80s.

The impact of piracy on music sales saw the departure of international record companies from all over East Africa, and still to this day, there is no operational vinyl pressing plant in operation.

That is definitely not to say that vinyl still isn’t very much alive and kicking.

There are two sweet spots for vinyl fanatics in Nairobi. The first deserves an honourable mention – James “Jimmy” Rugami’s vinyl stall in Kenyatta Market. James, or Jimmy as he’s known by his friends, has been selling records from bricks and mortar market stall number 570 since 1989.

Jimmy’s desire to sell vinyl was sparked by an old record player he repaired by hand in his hometown of Meru, near Mount Kenya. After moving to Nairobi city centre in his youth, he picked his spot opposite a popular smoky meat joint. To this day, his stall is jam-packed full of record players, tools, tapes, speakers, and vinyl. Embracing every genre from classical to hip-hop, soul, pop, East-African traditional music from the 60s and 70s, gospel and blues, Jimmy has arguably the biggest and most eclectic collection of 7” and 12” vinyls in East Africa.

The second spot to grab yourself a new track (or three) is the Melodica Music Store in downtown Nairobi. While I wouldn’t usually recommend a walk by yourself in downtown, you’ll be well looked after in this family-owned joint.

A little walk down Tom Mboya Street you’ll find a den of musical mysteries: traditional instruments, records and tunes from classic East African labels like Edition Diabim, Sulwe and Editions Mbonda. The owners don’t let the lack of active vinyl-pressing plants stop them from dishing out the best tunes, with huge stocks of vintage 45’s and mint condition copies of 7-inches produced in-house.

Both Melodica and Jimmy’s stall are benefiting hugely from the vinyl renaissance which has hit Kenya in a big way, seeing swathes of young music fanatics selling the stores out of classics old and new.

Nairobi is a city flowing with music and this is by no means a complete guide but will provide a great starting point for unlock the true mysteries of the scene.

Exploring sites that connect Tallinn’s oppressed past with its glimmering, creative future