This time last week Bloop was at Tallinn Music Week being exposed to new music from around the world. As if this wasn’t enough the Bloop inbox has been inundated with interesting new music over the past week.

The new music list this week takes a loose pop theme, with many of the artists featured subverting the classic ‘pop’ form in new and interesting ways. Of course, there is also the usual rock, electronic and hip hop activity for balance.

Zambian artist Sampa The Great is creating a new musical language born from her globe-trotting existence and her poetic heart. ‘Black Girl Magik’ is a standout track from latest album Birds and the BEE9 and is a reflection on strength and contribution of black women. Sampa’s unique smooth flow floats above gentle melodies and stripped-back beats to create a beguiling tribute.

‘Death Money’ is the second tune to surface from Sanae Yamada’s (Moon Duo) new project Vive la Void. It’s another sonic, psychedelic exploration of the synthesizer’s mesmeric powers. A krautrock vibe pokes through the air of hazy repetition to create a song that only adds to the excitement for the alum out in Sacred Bones in May.

Appendix the new album from Derbyshire’s Grawl!x is a gift that just keeps on giving! ‘Appendix B’ is a stunning example of the epic, orchestral dream-pop on offer and now comes with a video that is a pure work of art. It’s a record that needs to be played.

Another Sacred Bone’s artist for the list this week. We’ve written about Jenny Hval a lot in the past. ‘Spells’ is another grandly conceptual work.

Unqualified Nurse Band are in the process of releasing new album UNB3 one track at a time. ‘Somebody Says’ is the second. UNB is a constantly evolving rock entity and this newest tune sees them taking on psychedelic pop in their own unique style.

Swedish producer boerd utilises classical influences and downtempo electronics on ‘Void’ an ode to the state of loneliness. It’s taken from a recently released mini-album well worth some attention.

Moving away from his punk roots, and now based in Berlin, Icelander Indridi now creates fragile and intimate tunes with an aesthetic of soft voice, woven acoustic guitar lines and sparse arrangements. ‘Amma’ is a statement of intent for brilliant new album ding ding.

Atlanta three-piece Omni are going from strength to strength, as they release new single ‘Sunset Preacher’ on Chunklet. It’s a kinetic power-pop tune with a strong melodic hook.

If you’re looking for some new explorations of the 80s gothic, post-punk sound then look no further than ‘Echelons’ by Second Still. It’s of the same hypnotic qualities of Siouxsie and the Banshees or Cocteau Twins – what’s not to like?

Another new Chunklet release! ‘Psychic Cruise’ is the new one from Honey Radar. It’s lo-fi slacker pop full of splayed noise and reverb.

At last week’s Tallinn Music Week, in a sweaty basement club Slovenian post-punk mavericks Lynch played a confusing set that jump through genres at an insane pace. Post-punk rhythms, classic folk sounds, metal rhythms and grunge angst all crammed into one set, sometimes one song. Check them out.

Russia’s Kate NV is an exciting pop proposition, with two separate musical persona’s that both have her own voice. One is as a 80s pop inspired artist making strange but accessible pop and the other is a experimental producer peddling organic, blippy electronica. ‘Bells Burp’ is a cut of the latter. Following a performance in Talllinn, NV is coming to the UK for dates soon.

Watching Mart Avi in Tallinn was a strange experience. He is a new pop artist cutting his own shapes from the familiar. Like an experimental bedroom-Bowie, his music is compelling but easy to misunderstand and even dislike. It has a uniqueness that makes it strange.

Not enough of ÄTNA’s set was witnessed at Tallinn Music Week, and mores the pity! The duo deliver a jazz-inflected, percussive and dark version of pop which is both soulful and avant-garde.

Kolchak are another recent Tallinn discovery. The band claim to be ‘atmospheric stoner punk’ but produce the sort of post-metal that fans of Neurosis and Red Sparrows will go nuts for. Epic, crushing, slowed down riffs and grand compositions make them heavy music with a brain.

Icelandic, feminist, horror hip hop! Is that not enough to entice you into the world of Fever Dream? It should be. Violently feminist, epic in flow and one hell of a live performer this is an artist worth keeping an eye on.

Bodega – How Did This Happen?

This new track from Bodega is near perfect, and a serious earworm. Tongue-in-cheek but brutally political to a post-punk rhythm and big riffs ‘How Did This Happen?’ is everything you want from a modern punk record. There’s nothing more to say, this is essential.

‘Eye To Eye’ begins like a familiar Jeff Buckley song before morphing into Rakei’s signature jazz-infused, downbeat RnB. With critical acclaim and a sound that is ripe for mainstream crossover Rakei is looking to have a big 2018. 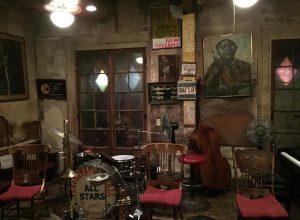