The stand-out point from this year’s Tallinn Music Week was its promotion of new voices. Artists that are using their uniqueness to subvert the musical format we know as ‘pop’ and taking it in new directions.

Estonia is 30 years young as an independent nation. Breaking the shackles of Soviet oppression, it has become a cultivator for the new, the forward thinking and the progressive. Not just liberated politically and economically, they have liberated themselves by embracing technology.

Now in its tenth year Tallinn Music Week has become the complete embodiment of this ideal.

Opening the event President Kersiti Kaljulaid spoke of the nation’s fresh thinking on the challenges of our world and our shared humanity, evoking Martin Luther King. This was politics as inspiration and not control, and this buzz was felt throughout TMW.

Ideas formed a central pillar of the week-long event. The key presence of the incredible Keychange PRS Foundation (of which TMW is a partner) and their campaign to create a 50:50 gender balance at festivals by 2020 changed the outlook of the event. TMW has already achieved this target and it was a key factor in creating its unique line-up.

This deliberate and revolutionary outlook brought forth new voices and new takes on the pop music form that few festivals can currently match for innovation. This is music subverted by young ideas and finding its voice in a climate of increasing power of identity.

These artists are not afraid of classic labels or the pomposity and pretentiousness of the old guard’s notion’s of “real music”. Identity, technology and tradition are all there to be manipulated.

These are the subverters of pop Bloop were blown-away by at Tallinn Music Week:

Russia’s Kate NV is an artist with a split personality. One minute she is making 80s pop-influenced avant-pop that should be regular chart fodder and the next she is the creator of blippy, experimental electronica that evokes visions of nature. Live she flitted between a two-synth set up, adorned with gadgetry and pedals creating her avant-pop bangers and bubbling soundscapes from scratch with sonic improvisation thrown in.

The darkness to Kate NV’s light, Tema Kresta create foreboding darkwave. Their live show at TMW was a meta take down of the digital age and the concept of performance. The duo switched vocal and live visual duties, delivering austere vocals and a cut and paste video mash-up which featured internet searches, strange videos and live translation of their lyrics via Google translate. Completely detached from the room and the audience they presented a thoroughly modern take on electro-pop with a gothic edge.

On the surface, The Magnettes could be just another contemporary pop band, but something interesting is happening with their own brand of ‘fuck pop’ – an empowering, angsty message for the #metoo generation.

Their show destroyed pop convention, as they flaunted both their overt sexuality and individual power. With their stage-chat and song lyrics they represented themes that, in the past, belonged largely to emo and rock music – small town alienation, anger, dark thoughts and kicking against authority.

Their latest album is simply called ‘Ugly Youth’ and standout track ‘Sad Girls Club’ expresses sentiments that are vital for our put-upon youth, including, “We just wanna cry cos the world’s so mean, we just wanna die because they killed our dream” and “I’m a downer, not a dancer. Please stop talking, go get cancer.” The Magnettes’ message is one of being OK to be different, owning your unhappiness and doing something about it. But also, not giving a shit what other people think.

In delivering this message Sanna Kalla and Rebecka Digervall owned the stage and converted the crowd with ease. This is conceptually the most interesting pop act to emerge recently.

In front-woman Allie Sheldan, Little Destroyer have a star in the making. Musically, the Canadian trio’s synth-driven, alt-pop is not going to change the world but unleash Sheldan in the live arena and something compelling happens. At TMW, dressed in Honda motorcycle chaps and a smiley face bra, Shelden burst forth with pure compelling energy and conviction that made her a must-see performer. Writhing around the stage, forcing out her words and clawing at her skin (so much so she drew blood) there is little doubt that this is an artist caught in the moment and not in a contrived act.

Delivering not so much a performance as a live assertion of gender and identity, Florian Wahl delivered on of the festival’s talking points with a middle-finger to conservative thought. His electroclash sound is nothing new but a display that included him strutting the stage in a black leotard that displayed his buttocks, exposing his genitals and simulating sex with a cream cake, made his set something of a unique experience. A Euro house version of Michael Jackson’s ‘Earth Song’ with amended lyrics was an unexpected inclusion. Florian Wahl is coming for your moral judgments with a pick axe.

Icelandic hip hop revolutionary Fever Dream is also rolling the dice for fem-revolution, in her home country and worldwide. Her feminist background, against the back drop of our world, provides a certain anger and aggression to her ‘horror hip hop’. Live she has an effortless flow, swaggering around the stage rapping over juggernaut beats. At Tallinn Music Week whether it was bringing a shopping centre to a standstill or performing on stage, Fever Dream owned every space and displayed an inspiring conviction.

It’s not every day you see an artist playing electronic fruit and veg, but that is something that makes up the live show of Latvian artist Elizabete Blačus. This could be a pure gimmick but as part of Blačus’ set up simply becomes another part of a mesmerising performance. Performing in the intimate and ornate surroundings of the Russian Theatre of Estonia she delivered a set that sat at the fault lines of pop music, experimental electronic exploration and performance art. The neo-psychedelic dream pop/avant-garde pop performance connected the organic (with her fruit headdress and ‘veggie synths’ – fruit and veg hooked up to be played as part of her set-up) and the array of electronic equipment which built the beats and stabs of the music. Creating each song live with loops, ethereal vocals and live flute playing, the result was an art-piece mesmerising to watch and to hear.

Estonian star Mart Avi, created a singular pop language, with pop music as high-concept art. Avi’s live interpretation of pop culture embodies a ‘bedroom Bowie’ persona and the cut-up, strange visuals of the ‘Avi Network’ that harks back to when live video art was subversive and strange. The moment he sat at the back of the stage to vape, like no one was watching, summed up his strange, artistic detachment from the room and the audience. Mart Avi exists in his own world even on stage.

The fact that Russian trio Mirrored Lips didn’t even make it to TMW because of visa issues has only added to the mythology around them and their excitement. The three-piece are a largely free-form act concocting bursts of post-punk and noise-rock with a complete disregard for genre convention. Their feminist missives are lifted by free instrumentation that never settles on a style.

These acts only scratch the surface of the ideas and artistry on offer at Tallinn Music Week but represent the subverting and exciting approach of the festival and the artists they featured.

Tallinn Music Week is leading the way in delivering unique ideas, art and music with a representative voice, let’s hope the rest of the world catches up soon. 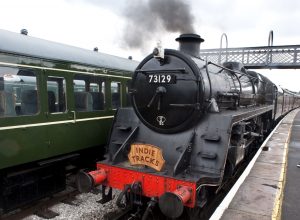