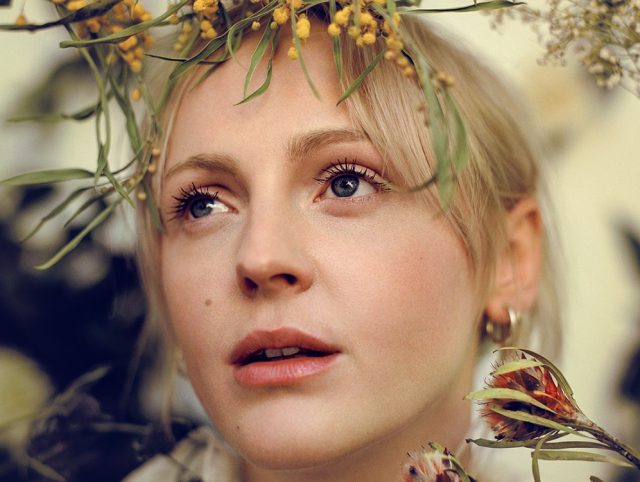 The SU venue at Goldsmith’s is an echo from a by-gone age – an age of free education, £1 pints and living off grants, a oft-romanticised era for students. Yet the people milling around are very much modern, forward thinking individuals.

All in all it seems the perfect place to witness Laura Marling in her glory before the release of her sixth studio album Semper Femina. Marling is an artist whose work is timeless, with echoes of the golden period for singer songwriters but who is also consummately forward-thinking.

She is leading a gathered throng through this magnificent new work with a special, stripped-back acoustic performance and Q&A session to shed light on its wonders.

The nature of these songs, her work, words, talent, laid bare are in that moment as telling as any discussion around the songs. Simple and stunning, this is Laura Marling in essence – a real artist and talent.

Taken from a Virgil poem and translated as “always a woman” Semper Femina is a complex, narrative-driven machination on feminity, womanhood and its place in the world.

It came from a particularly “masculine time” that eventually led to Marling realising these songs about women didn’t need to be told from a male perspective.

“We’re somewhat accustomed to seeing women through men’s eyes, and naturally that was my inclination to try and take some power over that, but very quickly realised that the powerful thing to do was to look at women through a woman’s eyes. It was a little stumble at the beginning of the record, a self conscious stumble – but yes that’s where that came from,” explains Marling.

These “women’s eyes” and their perspective has not just been a factor in her music work but something of a wider discussion of late, in particular with Reversal of the Muse a series of podcasts about what’s happening in music and feminine creativity and its relationship to one another.

“I started the Reversal of the Muse before I started this record, though my interests in femininity and the origins of that have fuelled both of these things. And whether femininity begins on biological level or a psychological level or an emotional level or whatever and the answer is there is no answer. I mean there are categorical answers but there’s also lots of theoretical stuff going around that. They definitely fed into one another though in the lead up to this album, because of its subject I’ve been asked a lot to have firm opinions about felinity and feminism and I still don’t know enough about either of those subjects to have firm opinions about them. So what I really enjoyed about the Reversal of the Muse and its subject matter was that it allowed me to keep asking questions about these things and that’s what I want to keep doing.”

As with all her work to date, these issues are told through stories that come from a very real place, from characters you can picture in your mind. On Semper Femina the strongest of these is ‘Nouel’ which contains the strong and telling line, “Semper femina, so am I.”

Whilst containing similarities these new stories come from a different place than those on her last album. Where these narratives come from constantly evolves.

“So where are my stories going now? I don’t know! (*laughs*) When I wrote Short Movie it felt like I was writing about something I was going to experience rather than something I had experienced. And music has a funny way, or creativity has a funny way of being ahead of you. So I don’t know where I am now, because maybe it’s still catching up to me. I think whereas Short Movie was more based on a landscape, this album was more based in thought.”

Again there is something of Marling’s personal experiences as a female artist that she has had throughout her career flowing through this new album. Like a taking stock of her own place in this creative industry.

“I think my experiences in that I’ve done a lot of travelling on my own and touring on my own – it can sound super romantic and glamorous, but dragging three or four guitars around and throwing them in the back of a car constantly, it’s a big mental and physical exertion and it can be a little bit scary you know. Literally being alone, getting paid, doing  all that stuff – I’m sure it’s scary for men as well, but I’ve been aware of that restriction of women traveling and that’s been the most relevant thing to me and I have this great fear of traveling alone now and I just noticed that innate sense of fear is really quite constricting. And perhaps more of an affliction to women than to men.”

And ‘travelling’ also plays a big part in this album’s genesis. Creation on the road does suggest that the work would be more of the mind, with no fixed place to pin the album to. Marling herself admits that she was “all over the shop” and that she also felt a certain sense of “English nostalgia” as she spent so much time in the US. The album was recorded in late 2015 in Los Angeles.

In sound this American influence can be heard in the threads of Semper Femina, in conjunction with Marling’s quintessential Englishness. Marling’s relationship with ‘the land of the free’ is complex, especially in how it influences her art.

“I was saying to someone earlier, I love America and find America very infuriating for the same reason. I love them because they give a lot of value to artists and everyone is an artists and that’s quite nice if you’ve devoted your career, inadvertently in my case, to being an artist. And it makes you feel good about yourself. But it also gives a very strange over the top reverence to people who have lived very self indulgent lives and demand to be called artists. And that represents my own inner tussle, a constant tussle, over whether something is an indulgence or is it a compulsion. America gave me a bit more freedom to indulge in that compulsion to create music, funnily enough because I went there to not do that. And that’s what happened to me, I got pulled into that again. In that way it gave me a lot of freedom to express myself without self criticism that I should be doing something more important, or more useful rather.”

So this process was one of questioning, of challenging and re-invention? This is also displayed in working with Blake Mills for this record, after five albums with Ethan Johns, which forced Marling further out of her comfort zone and forced improvements in her craft.

“Working with Blake all of a sudden was quite a shock to the system because he has a very different way and he is incredibly innovative. He’s not very far in age from me so we kind of met at a similar level which I’ve never experienced. I would go home every night from the studio and practice guitar because I wanted to be as good as him. Over the three weeks we were playing together my guitar playing improved a lot and he’s just someone who has spent a lot of time playing guitar and it made me think I need to spend some more time playing guitar, so that was good. He’s got an incredible tonal palette and he’s a cool cat so it was a great honour.”

Another new venture saw Marling direct her first music video for ‘Soothing’ taking inspiration from series of vivid dreams she experienced whilst making the album. The second in an intended trio of self-directed videos for ‘Next Time’ has just appeared online.

Listening to Marling speak (and to her music) there is an obvious intellectual depth, and it is easy to focus on that and not the more human aspects of her character that also shines through. Her chat is also packed with self-awareness and, at times humour. In explaining that if she was not a musician she would like to be a chef and her specialty would be “something vegan. That usually impresses people.” Even though, she jokes, she does eat meat.

And this joking is a perfect illustration of the kind of character Laura Marling has, a true artist at the top of her game with an album that asks the big questions on femininity whilst making the whole thing relatable and simply enthralling.

Semper Femina is out on 10th March.