Rashid Khalifa’s show ‘Penumbra: Textured Shadow, Coloured Light’, currently on display at Saatchi, is not only metaphorically immersive but physically, involving sculptures which dominate the space and surround the viewer.

Khalifa’s huge, colourful sculptures fill one of the rooms of the exhibition, and smaller metal parametric sculptures adorn the walls of another.

The room-filling structures are particularly mesmerizing; not only are they visually absorbing, but walking through the maze-like paths between them allows you to become encircled by painted shapes and gently hit by the works’ geometric shadows.

Khalifa tells Bloop that he has been interested in the relationship between light and shade throughout his career as an artist; this interest is presented to visitors of ‘Penumbra’ with clarity, reflecting extensive developments of thought and practice.

“I would like visitors to Penumbra to experience the beauty of textured shadow and light cast through my polychromatic metal structures,” says Khalifa. “It is important to experience what is in view and what is kept out of view, and the gaps and openings that I have created in my works create new experiences dependent on the viewer’s position.”

He says, “A dialogue between the exterior world and interior world takes place in my works, in particular with the labyrinthine structure that I have created in the second room of the exhibition space.”

Further developing on the ideas of the interior and exterior of the works, Khalifa explains that the path through the structures reflects weaving paths between buildings, an example of a space which can feel simultaneously enclosed and public.

“The weaving path through the structure evokes winding streets, the shapes and tones of an urban environment, exploring the public and private space in architectural forms,” he says. “A tension is created between vibrant and ornate steel grids and the calmness of the voids beyond the metal face.

“I have created a route that the visitor may pass through that at once keeps them in the public space, yet partially hides them from others that are kept separate through the barriers of the mesh walls.”

When planning the exhibition, Khalifa considered the rich history of Saatchi’s building, particularly drawing inspiration from its past function as a school.

“It was once used as a school and its expansive parade ground was built as a school for children of soldiers’ widows,” he says. “After going through myriad different uses, Saatchi is now in the building, and the parade ground once more is used by children from the neighbouring school.”

Walking through the maze of colour in Penumbra can encourage a youthful sense of awe in visitors, with people looking up to see a rainbow of hues and looking down to see how their own shadows dances and interact with the shadows cast by the structures.

Khalifa says, “I am inspired by the continuous inquisitiveness of children to explore and find places and imagined worlds that an adult would never think about.”

If you have not yet thought about visiting ‘Penumbra’, Bloop highly recommends going; today is your last chance before it closes.

You can find out more about ‘Penumbra: Textured Shadow, Coloured Light’ on Saatchi’s website here. 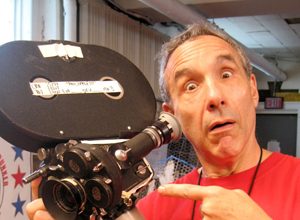