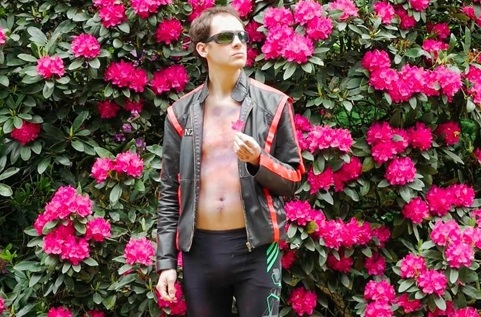 Derby Film Festival is launching the first edition of ParaCinema this weekend – an event that delves into the outer reaches of cinema and gives a middle finger to the mainstream. Low budget, German gem Leon Must Die gets its UK premiere in the middle of this steady diet of mind-altering horror, sci-fi and fantasy as one of the must-see movies on the bill.

Director Lars Kokemuller has concocted a bitter-sweet and darkly comic movie that combines and subverts the clichés and tropes of time-travel thrillers and rom-coms for a unique take on both.

Terminally ill Leon unwittingly creates a technology that will indirectly end the human race. A female assassin is transported back in time to off him and prevent the apocalypse. There’s just one snag – the two fall in love.

As a kind of indie auteur, Kokemuller has multiple credits as an actor, director, producer, writer and composer, he has crafted much of the movie from his own vision and needs. We caught up with the filmmaker before the UK premiere to discuss his unique take on the travel-travel genre.

Leon Must Die is a really interesting take in several movie genres and genre tropes. Where did the concept come from?

I love genre-bending. I’m always thinking about several concepts at once and I love that moment when they click and come together as something new and interesting.

In this case, I had read something online about the potential of love stories in sci-fi, and I found that idea really interesting. I had also just been watching as many lo-fi Sci-Fi films as I could find, because telling Sci-Fi stories on a really small scale fascinated me. Since it’s usually done really big and loud and expensive.

The third part to the idea was a long conversation about death, and avoiding it, that I had with the lead actress, producer, art director and editor of the movie, Nisan Arikan, who I worked with for the first time on this one.

We’ve become a film making team since, sharing the work on every movie pretty much 50/50. By now, we’ve made three feature films together, and we’re working on the fourth one.

I tend to depress people by talking about death a lot, but Nisan really debated me for a while. After our conversation, the general concept of Leon must die was clear to me. It didn’t take long from there to the finished script.

Are there any films in particular you were looking to subvert with this movie?

I don’t know. There sure are some Terminator-jokes in there and many other sci-fi movies get referenced, but I don’t think I was trying to subvert anything in that sense. Just paying homage.

Is the worry that humanity could create technology that wipes us out a personal concern?

No. On the contrary! I’m not a science nerd and pretty stupid when it comes to most of it, but I’m really hoping for artificial organs, those nano bots that repair damage and decay inside the body as soon as it occurs (I’ve heard about them, which doesn’t mean they’re a thing), and, of course, colonies on other planets, before this one blows up.

A guy at a party once explained to me a lot about ideas of humanity sharing one mind, like a mushroom or something, a topic that Leon Must Die sort of dips into with its whole “uploading minds into computers” thing. I hadn’t really thought about that until that guy told me I had made a movie about it, and coming from him, everything about that concept sounded nightmarish (even though I think he was a fan of it). So, maybe that’s a concern. But not really. I love new technology. If anything wipes us out, I think it will probably be people who have a problem with progress, not progress itself.

Why make personal stories as much the focus as the sci-fi elements – the illness, the love story – what do you think this adds?

It adds almost everything I care for. That’s my main problem with most genre movies, but sci-fi in particular: The lack of personal stories. I very rarely care for the characters in action films, but I often do wish the characters in quirky rom coms would have more to worry about.

What are your hopes for the reception of the film?

I hope for people to find it funny, maybe charming, and maybe something to think about for a bit and not forget immediately. So far, the reception has been really good.

In the US, Vietnam, Iceland and many more countries. In Germany, though, people have a tough time grasping the irony. I’ve heard complaints about “the Terminator” of this movie looking like “he’s coming straight from Christopher Street Day“ (as if that was a bad thing!). I do hope that people outside Germany will continue to understand that the cheesy sci-fi parody stuff is a joke.

Do you think it has the potential to become a cult classic?

Being a narcissist: Yes, of course!

What do you enjoy more acting or directing? Do you think working in both gives you a good understanding of creating quality work?

I enjoy both, but I’m more happy when I’m directing. I’m a type-1-diabetic and you can actually see in blood sugar, how it’s staying perfectly low and steady when I’m on set, directing. But never when I’m not.

I’ve played a leading role in an Australian multi-million-dollar TV-series, where I’ve learnt a lot about making movies that I wouldn’t have learned otherwise, so yes, me working as an actor has influenced my other work in a positive way.

Did you soundtrack Leon Must Die? Do you think soundtracking your own work means you can get the score you really need?

Yes, I did. That was a money saving thing, actually.

I’d much rather rely on other people to do all kinds of things on my movies (color grading, soundtrack, sound design, sound mixing, and so on), but Leon Must Die had a budget of 100€ (one hundred Euros – that’s not a typo), so me and Nisan had to do everything ourselves.

I’ve been making music since I was a kid and I’ve played in a band and toured the country for seven years, so I’m confident in my abilities and I’ve soundtracked all my movies so far but one, but I’d rather leave it to people like Edinburgh composer Ioannis Moutzouris, who did the soundtrack to our film Naomi and the Pirate and who I’m going to work with again and again, whenever I have the budget.

Leon Must Die receives its UK premiere at Derby Film Festival on Friday 4th May at 12.00pm and is screened again on Monday 7th May at 5.30pm.