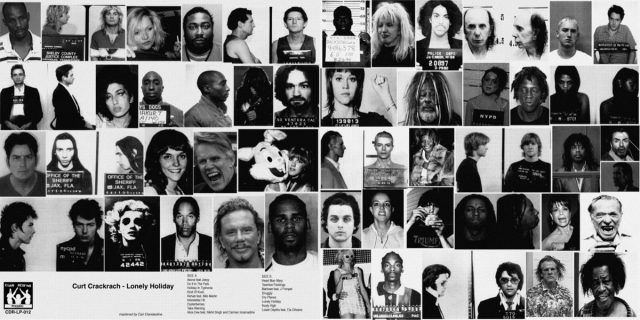 Three years ago, at a record store in France, I came across what was possibly the greatest album artwork I’d ever seen. The album was called Lonely Holiday.

Various celebrity mugshots and candids filled both sides of an album by an artist going by the name “Curt Crackrach”.

Intrigued, I asked the record store owner to play it on the stereo system. What I heard defied simple categorisation – one track after another seemed to exemplify a different sub-genre that couldn’t be easily classified. Discogs describes the album as “Trip-Hop, Illbient, Italo-Disco & Glitch” which is probably largely accurate.

But talking to Orlando’s Crackrach, who has an encyclopediac knowledge of rap and various obscure sub-genres, he describes it as his own Donuts (J. DIlla) and delights in the fact that a review once referred to him as the “lo-fi Madlib”.

The album features several cameos from Crackrach’s friends and collaborators, including rapper Joeyy (16 at the time), which makes the album seem strangely modern in a cameo filled hip-hop era. But the album, which is comprised of otherwise instrumental music, goes into trippier and more psychedelic territory than anything you’d normally hear on a “beats” album.

Lonely Holiday was initially released in 2012 on Clan Destine Records – 100 copies pressed on vinyl. For three years, the bandcamp page still had copies available, until recently, when it was finally listed as “sold-out.”

In recognition of that disappointing fact, perhaps now would be a good time to highlight a largely unknown and underrated album.

Check out the full album HERE