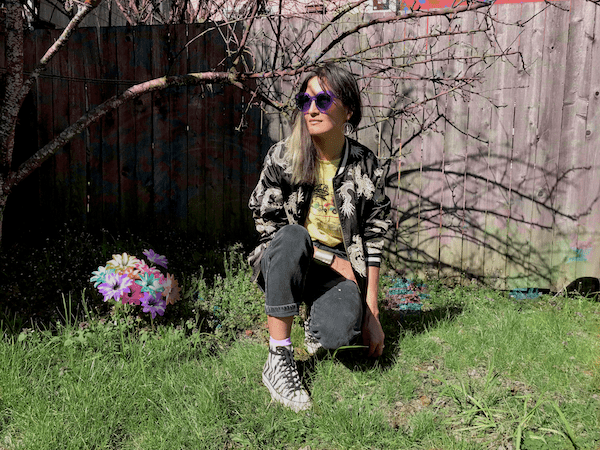 I’ve heard four separate world leaders compared to Hitler this week, without any irony. Admittedly one accusation of Hitlerness came from a guy who also believes ‘they’ are outside his house because of what he ‘knows’ – but it’s still a weird frequency for one week.

Mirroring this crazy time, a lot of the new music has landed with Bloop this week has been dark and weird. Maybe it’s time for some light to be let in?

None of this really matters, here are the new tunes we’ve liked this week:

Never an easy act to pin down Portico Quartet, confused things with a hiatus of electronic-pop as three-piece trio Portico. Now they are four again and buoyed by last years excellent album Art In The Age of Automation. Companion record Untitled (AITAOA #2) is due in April with more deep echoes of jazz, electronica and ambient music. ‘Double Space’ shows it will not disappoint for fans of their genre-jumping jazz style.

If you want to know why the third album from Grawl!x is an aural wonder, read our recent review here. While reading that review, let ‘Appendix B’ unravel itself to confirm our verdict in your mind.

The Soft Moon – Give Something

Luis Vasquez aka The Soft Moon is drawing attention to recent album Criminal (released on Sacred Bones) with a new video for gut-wrenching, sonic-assault ‘Give Something’. This is a toxic, obsessive work of electronic pop which comes from a fractured place.

This track from satirical art-punks LICE announces the first signing to Idles’ front-man Joe Talbot’s Balley Records. Proving Bristol is churning out vital, uncompromising bands, LICE have much to offer for fans of their label mates fraught, angry but funny punk delivery. ‘Stammering Bill’ is perfect punk for imperfect people.

Jazz mavericks Onyx Collective have announced two new vinyl releases for Record Store Day, re-releasing standout singles ‘Fruit Stand’ and ‘Snake Charmer’ from their recent Big Dada released EPs. After this there’s a collaborative 12” featuring new songs from Nick Hakim and two other Onyx tracks. Their psychedelic take on jazz is worth getting on wax.

Fake Laugh – Better For Me

Fake Laugh has been chosen to support the thoroughly wonderful Girl Ray on tour. Not a big enough recommendation? OK, check out ‘Better For You’ a beguiling slice of blissful, melody-driven indie. The jangly, wistful kind rather than the raucous leather-jacket, trust-fund kind. That kind of indie.

This is sleazy! ‘Crack Crack’ is the claustrophobic and sinister first tune from Big & The Fat, a new London four piece clearly indebted to the darkest end of the post-punk spectrum.

Dark electronic noise is Benjamin John Power’s (aka Blanck Mass) calling card. Combine that with modern goth master Zola Jesus on remix duties and you have something dark but accessible. It forms part of a remix EP that has just dropped – get on that!

For over a decade placing BMSR’s sound has been a perplexing task! ‘Baby’s In The Void’ doesn’t make it any easier. Dystopian, creaking electronic-something-or-other with nods to Boards of Canada, cLOUDDEAD and Aphex Twin but not really sounding much like any of them. It’s good, basically.

Spring is fighting its way in, slowly! We just need some sunshine. Vitamin D deficiency is no fun. For now ‘Long Wave’ by Bonny Doon will give you the impression of a hazy summer afternoon. A lovely piece of slacker indie-pop its simple, breathy and lo-fi in the best way.

‘Avoidance’ is a frenetic chunk of post-punk from Ganser, taking its cues from no wave and the period when punk was morphing into goth! It pulsates in a truly threatening manner. The whole of new album Odd Talk is the same and well worth a listen in April when it drops – if this is your thing!

This is MR DOOM and therefore, by default is awesome. ‘Bombface’ comes from his collaboration with Czarface. It’s another classic DOOM joint – what more did you expect?