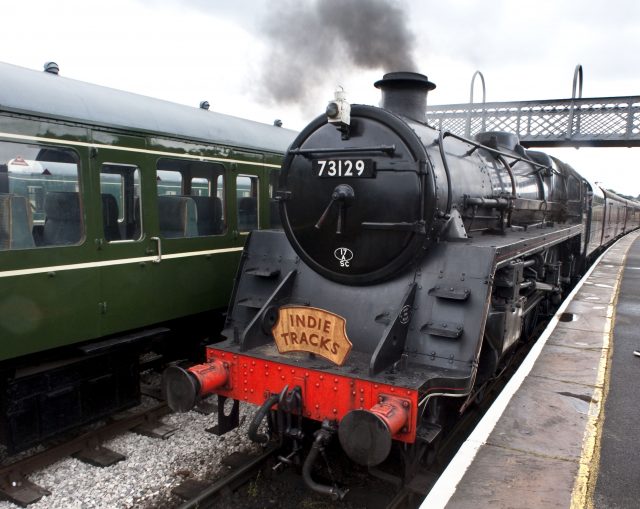 Nestled away in the Derbyshire hills, on the site of a steam railway museum, Indietracks has forged an existence as one of the UK’s best intimate festivals.

The Mecca of the indie pop community it draws an international crowd to revel in the twee sounds and village-fete feel to watch bands the best the genre has to offer. In 2018, the organisers have pulled together arguably their best line-up to date with a varied run of acts that in their diversity all have a sense of ‘pop’.

With Indietracks 2018 just around the corner we spoke to organiser Andy Hudson about this years line-up and the enduring appeal of the festival.

Why do you think Indietracks has survived when so many smaller events come and go?

We’re really lucky that people come along to the festival each year – thank you everyone! – and that the Midland Railway Centre are happy to host a music festival at their beautiful steam railway. It was a bit of a risk for them at the outset, to back Indietracks financially and in terms of their time and effort, but their courage and optimism in the early years has really paid off! Also, we keep finding amazing new bands that have never played at the festival before – I think the majority playing this year have never played at Indietracks in the past, which helps us keep the festival feeling fresh and exciting.

Do you think 2018 is the festival’s strongest line-up to date?

We’re really excited about all of the bands on our bill this year! We’ve some fantastic artists that have never played at Indietracks before – including British Sea Power, Honeyblood, Dream Wife, Amber Arcades, Sacred Paws, Even As We Speak, Anna Burch and Gwenno – as well as some familiar faces like The Lovely Eggs, Darren Hayman, Girl Ray, Night Flowers, Haiku Salut, Tigercats, The Smittens and Colour Me Wednesday.  I wouldn’t really want to compare it to previous years, as that would feel like a parent trying to pick their favourite child, and all the line-ups feel special to me!

Would you say that this year’s line-up has extended the ‘indie-pop’ remit to its widest definition? It seems quite a bit more diverse than in the past.

There’s hopefully quite a lot of variety this year, which is a really positive thing, and hopefully we’ve got a nice range of artists that make it fresh and exciting for people. Every artist on the bill has a sense of independence, creativity and a sense of pop, in my eyes at least, so they definitely have that in common.  And of course, we have to reflect what’s going on around us, in terms of new bands, promoters, labels and club nights, and we try to follow what’s exciting people more widely.

Having said that, I think we’ve booked quite a few artists over the years that stretch any remit and hopefully we’ve kept people guessing with our line-ups! Right from the start we’ve had people like Emmy The Great, Los Campesinos!, Summer Camp, Jeffrey Lewis, Art Brut, Gruff Rhys, Bis, The Go! Team, Cate Le Bon and lots more artists that stretch the remit. Even bands like The Wave Pictures or Martha, who have become Indietracks favourites over many years, don’t necessarily fit within a typical definition of ‘indie pop’. I’m sure there’s lots more we can do to stretch things and make the festival even more attractive and diverse in future, and I think our audience feels really positive about that approach.

We really just try and book bands that we really love and that we think will fit the ethos and atmosphere of our festival. It’s been brilliant to see the recent successes of artists like Amber Arcades, Dream Wife, Honeyblood and Girl Ray. Most recently, the Sink Ya Teeth album seems to be getting some amazing reviews and airplay. We love all these artists irrespective of whether they have mainstream success, but it’s really fantastic to see them doing so well.

How do you go about putting together the line-up for the festival each year?

In the autumn, we get together as a team and decide which artists we’d like to invite. We’ve been really lucky to secure some amazing headliners over the years, especially as sometimes it will depend on their touring schedules. We also invite artists to apply to play and receive over 400 applications each year. We listen to all of them and invite our favourites, and we’ve discovered some amazing artists that way. This year we found French Boutik, Tugboat Captain, Whitelands and Tekla through that route, all of which are fantastic! We also keep an eye on the Anorak messageboard and social media to see which bands our audience would like to see.

What are you most looking forward to at this year’s festival?

As you can imagine, I love everyone that’s playing this year, and in addition to the headliners I mentioned earlier, we have a few really special sets; Darren Hayman is performing the classic Hefner album ‘Breaking God’s Heart’ on the Saturday, and the legendary Sarah Records band Even As We Speak are coming all the way over from Australia on theSunday! I’m also really looking forward to Night Flowers, Anna Burch, Spinning Coin, Girl Ray and Sink Ya Teeth.

What is your Indietracks highlight to date?

I think my all-time favourite Indietracks performance was The Go! Team in 2015. The show itself was electric, and then afterwards their singer Ninja joined the disco, dancing along to Le Tigre with pretty much every group in the locomotive shed. Also, La Casa Azul in 2009 and Allo Darlin’ in 2014 were equally amazing, and Cate Le Bon last year was a particular highlight too!

We’re really lucky to have such a friendly and wonderful audience, and it really feels like the artists and visitors are all having fun together, rather than there being a big divide between the performers and crowd. Our setting on a 1950s steam railway is amazing and picturesque, and it feels a million miles away from the stresses of work, college or whatever people are usually doing.

The staff and volunteers at the Midland Railway play such an important role in setting up the festival and establishing its welcoming atmosphere. As an organising team, we’ll always try our best to make the festival special and will always listen to people to see how we might improve in future.

Find more about Indietracks on their: