Indietracks 2018  is now just days away. We’ve checked out all the bands, downloaded the excellent 40-track compilation and started packing for a weekend of steam trains and DIY pop.

This is the festivals strongest line-up to date, with few gaps in a schedule of incredible artists so it’s been harder to pick our schedule at the indie-pop Mecca than ever before.

And it’s not just the twee jangles of indie-pop to enjoy this year, with electro-pop, surging punk and introspective folk all getting a look in as well.

We’ve scoured the Indietracks 2018 line-up to drill down to our must-see acts from the weekend:

Recalling the dark funk of ESG, London/Glasgow duo forge funky, pop-gems that sit between post-punk and indie-pop. Signed to Mogwai’s Rock Action label and a critical favourite Sacred Paws promise to be one of the most infectious live acts of the weekend.

Through sheer determination and relentless touring, The Lovely Eggs have become a live institution. Indietracks is a regular haunt for their irreverent, quirky punk ditties. Latest album This Is Eggland comes with added punk-punch and the Eggs have developed into not just one of the most fun live acts, but one of the most powerful, live acts around.

This Indietracks performance from local electro-pop outfit Mighty Kids pretty much coincides with the release of their Won’t You Reconsider EP released on Reckless Yes. They also have a beer named after it from new local brewery Neon Raptor. They tinker with bass, synths, ukuleles, drum machines and samples to create melancholic DIY electro-pop.

With members hailing from different corners of the globe, there’s also something otherworldly about Ghum’s sound, like an indie soundtrack to a David Lynch film. Their floating dream-pop is often infiltrated by big riffs and noise which tells of their love of The Cure, PJ Harvey, Pixies and Warpaint. They make deep, dark, complicated songs for misfits.

The new band from former members of the incredible Joanna Gruesome, Keel Her and Garden Centre were always going to be high on any list. But Ex-Vöid truly step out of the shadow of the collective former works with pop hooks infiltrating a latent punk aggression. If you think Teenage Fanclub and Big Star make the most beguiling kind of pop – this band is a must.

DIY folk troubadour Navina weaves intricate, personal narratives with multiple instruments and voice. Playing all instruments, except drums and bass, and with no label she has received acclaim worldwide, showing just how powerful her music is. This is a sweet lull for your Indietracks agenda.

London based Night Flowers are definitely a hype band in indie circles right now, with debut record Wild Notion regularly being pinned as an album of the year contender. They tread the Faultline between jangling indie-pop and the surges of shoegaze with intertwining female/male vocals. Catch them now before they blow up.

Peddling the kind of untethered guitar pop that made their label, Domino, famous in the 90s, Spinning Coin’s music is tense with frustration but also a sense of knowing fun. Their effortless, unpretentious melodic sound is a must for fans of the summery, slacker indie of Pavement and Sebadoh.

Transforming feminist rhetoric into anthemic, indie dancefloor fillers few bands are packing such important messages into pure accessible bangers. They are a blast live as well.

Dutch musician Annelotte de Graff has been, when not working on UN war crime tribunals, releasing music as Amber Arcades, making beguiling indie. With last year’s Cannonball EP and this year’s album European Heartbreak she has come into her own as a truly great artist. If Heavenly Records think this, it is probably a good idea to agree.

If you don’t know why you should watch British Sea Power, there’s probably no hope for you.

They describe themselves as “Punk witches from London, described as “The Ramones meets Bikini Kill”.” Who doesn’t want to watch that? Smashing the patriarchy rarely sounded this good or this much fun.

With introspective bedroom confessionals, told to a backdrop of 60s girl-group inspired pop and alt-rock guitar tones Marlaena Moore is one performer that could be a standout from the whole weekend. This is music that should appeal across genres. It’s pop in the most classic sense.

Tigercats
Indoor Stage – 4pm-4.40pm – Sunday
As an amalgamation of so many indie-pop genre tropes, Tigercats sound like the perfect Indietracks band, or at least what we’d imagine the festival to be had we not been. They make sweet, naïve indie-pop songs that are perfect for forlorn summer meandering.

It’s safe to suggest that Sunday evening takes Indietracks 2018 into some distinctly different territory. A territory owned by electronics. Gwenno Saunders has emerged as one of the most vital British pop voices of late, forging retro-futuristic pop tunes that float along as if in a dream state. This year’s album Le Kov is 100% essential and transported into the live arena is equally mesmerising.

Progressing to the main stage, Indietracks favourites Haiku Salut are finally starting to get the recognition they deserve. After guesting on Public Service Broadcasting’s last album, signing to Prah recordings and delving further into electronic sounds, they are on the verge of releasing an epic new album. From distinct indie-pop routes, they have created enthralling rural electronica that live has come into its own in recent years. Essential.

Post-punk electronic duo Sink Ya Teeth sound like they’d be more at home in a dark, Berlin basement rave than Indietracks small church. With minimal rhythms inspired by rare groove and 80s/90s dance music they sound like ESG dueting with the Delta 5 on a Chicago House covers record. This is not what you usually get at Indietracks and that makes it a must.

Girl Ray seemed to appear out of nowhere, sounding quite unlike anyone else and like they should have always been around. Their initially happy sounding songs bubble under to melancholy sadness, but it’s all so reassuring. Debut album Earl Grey was one of 2017’s standout releases, also showing the potential to come. Don’t miss this band. 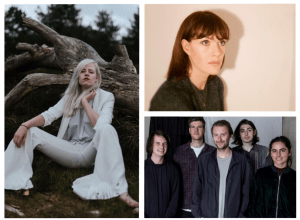