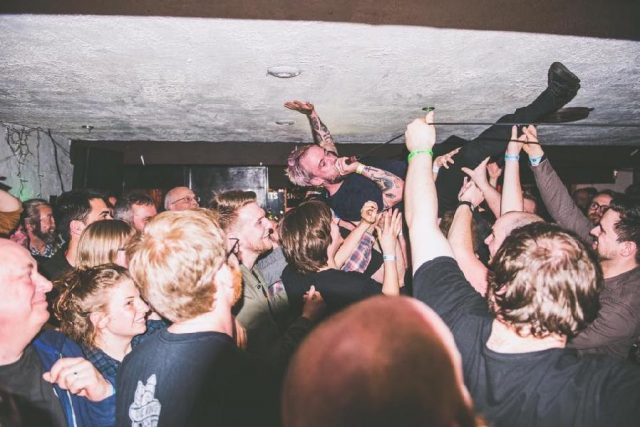 With a relentless touring schedule, a stunning debut album and a message to believe in, Bristol’s Idles are proving to be the most vital guitar band of 2017.

They connect on a very personal level. In fact, I first meet the band after their brutal set in the tiny Vines bar in Derby for 2Q festival, they have something to say and we get talking for hours. Every member of the band talk to people in the bar openly, they are a band that want to connect.

A few week’s later I am on the phone to front-man Joe Talbot in between soundchecks at a gig in France, still performing, days after their ‘tour’ has finished. For Idles playing live is an on-going event, taking their post-punk, noise-driven manifesto far and wide.

That Vines gig booked when they ‘were no one’ came in the flurry of excitement surrounding debut album Brutalism and a growing reputation for frantic live shows. They were the festivals buzz band and the 80 capacity venue turned into an explosion of genuine and joyous catharsis – kicking back at the world.

“That’s what we are about. Catharsis and grief and all those things that come up, but as long as the perspective you are coming from is a loving one there is still room for you to be pissed off and let it out in a loving way. That’s what happens,” says Talbot.

If there is one word to describe the Idles experience it is ‘connection’, not just in their aggressive sound but in Talbot’s personal, political and oblique lyrics. He explains that he is keen to allow people’s own views and interpretations to work with his songs as that is how genuine discourse works.

“People take so many different things from songs and that is what I love about it. Expression is so vast a universe. I am political, but I am definitely a lot less linear than I used to be because I am learning that everyone has good and bad views, you know.

“No one is wrong, because it’s experiences. Depending on what mood you’re in these songs will mean different things. These songs will mean different things to me in 20 years because I’ll be a father, or on my death bed or because of the way the government is then. We could look back and say ‘think how good things used to be’ or the other way round. I think it is good for me to enjoy them as what they are at that time,” he says.

Several tracks on the album appear to be a kick back at Tory Britain and the system we find ourselves in, or at least that’s how I read them. Take the brilliant ‘Well Done’ or the deeply personal ‘Mother’, a seemingly feminist anthem with the line “the best way to scare a Tory is to read and get rich.”

Talbot’s explanation of this track perfectly explains the abstract way he brings his personal politics to Idles music.

“I didn’t know what I was writing at the time. It wasn’t like I sat down and thought ‘right I am going to write a song about feminism and mum and the roles women play’, we would already have the music and I would go away and write around it. What I would usually have is a key word in my head when I listen to song. I’d listen to it over and over again and then a word or a sentence would pop into my head and then the song would come from that,” he explains.

He continues, “With ‘Mother’ it was that phrase ‘mother fucker’ – what does that mean? It’s a violent phrase, it’s violent towards women but also it has the word mother in it and my mother was fucked throughout my life. From her disability, her alcoholism, her workaholic nature working 14 hours every day. It’s about the roles women played in my life and exploring those ideas and then trying to sum it all up in abstract and short sentences. Not long sentences, I don’t like doing that, I am not going to spell it out.

“My mum who worked a lot and got rich, ended up dying because of it. It’s a phrase I live by I’ve always said ‘keep yourself educated’ and work hard but not to the point that you end up six feet under.”

With his mother on her death bed he felt animosity towards Jeremy Hunt’s NHS policies and that personal grief and anguish is heard clearly in the tune.

“I’ve got some views and I am more than happy to talk about them, but I think that people get carried away with the idea that my songs are linear. They are abstractions of my own personal experiences.”

A socialist who believes in listening to the views of others and the democratic process Joe Talbot is an effortlessly engaging speaker, from the heart but also with a direct anger. As the conversation turns to the forthcoming election he gets animated.

“In a complete democracy, we all have the right to vote which means we are in control as much as possible to manifest our opinions and beliefs so I think everyone is obliged be interested and vote, or don’t be interested and don’t vote – but shut the fuck up!

“Just shut the fuck up. Don’t pipe up on Facebook, don’t come at me in the pub. Your vote and you’re interested great. If you’re right-wing and you vote, great we’ll have a discussion. If not, don’t moan when shit hits the fan, don’t moan when I pint is really expensive, or your bills are too high and there’s no nurses in the ward your mum is dying in. Shit like that, if you don’t vote, you don’t count.”

The directness of this statement matches the band’s sound – direct but empathetic, real but abstract and ever so slightly hilarious.

Idles are a fully formed concept, with Talbot even taking control of their visual identity as well creating a world for Idles, and their fans, to inhabit and understand.

“I do all the artwork and videos. Lee [Kiernan], our rhythm guitarist, we do them together now. There’s two I didn’t do but I’ve done all the artwork, the t-shirts because it’s important for me, that if we want the music to be honest and we’re capable of making art, to create a language. This is what art is, a way of communicating your ideas to other people.

“We are a bit weird, our lyrics aren’t linear but after a couple of albums after 25 t-shirts you’ll be able to pick out ‘that’s what Idles are doing, that’s what they are about.’ To have the complete monopoly on everything we are doing means we can do that quicker,” he says of the staunch DIY ethos of the band, not he adds, they have a lot of choice in the matter at this stage.

“The nature of DIY, people are DIY for two reasons – either they are arrogant or they are skint, and we’re both! We don’t want anyone touching our artwork and we can’t afford to have other people make our videos anyway.”

“The whole point of what we do is through necessity.”

So much of Idles being feels necessary and all this has turned them into one of 2017’s hype bands, turning heads all over the place including a BBC 6Music album of the day and a five star review right here on this site. Live they have not stopped and have caused sonic carnage everywhere they have visited, turning up in some unexpected places.

The next really unexpected place is opening for The Maccabees at their farewell shows at Alexandra Palace. As a long time fan Talbot is excited by the prospect.

“It’s a dream come true. They were my favourite band when they first came out, for a long time. But we are also aware that no one who is turning out it there to see us in any shape or form. It’s not a normal support, it’s where we have to show some respect, and I will show you some respect for them, I think they are an amazing band and they are amazing people. It’s going to be a learning curve whatever happens.”

He goes on to explain the ‘respect’ that needs to be shown to the band and their fans.

“With Idles we are not going to change anything about our show, we are going to work really hard on making it the best show we can make it. But I am not going to spit in someone’s face on the front row because they don’t know me, they are not there to see us. It’s going to be a pretty emotional time for a lot of these people.”

“Working really hard” on the live circuit is becoming a thing for the band, they are playing everywhere they can with a packed summer of festivals as diverse as Download and Roskilde as well as venues across Europe. The fact is everyone needs to connect with Idles live, it’s where they excel and their message of loving, righteous anger is best distilled.

Idles means something, musically and morally because they mean it! For Joe Talbot (and the rest of the band) what they are doing means ‘everything’.

“This is everything I have ever worked for. We always knew we were pissing against the wind, we are not a palatable band. But we for some reason we have found the formula that allows us to tour and release an album – it’s just happened.”