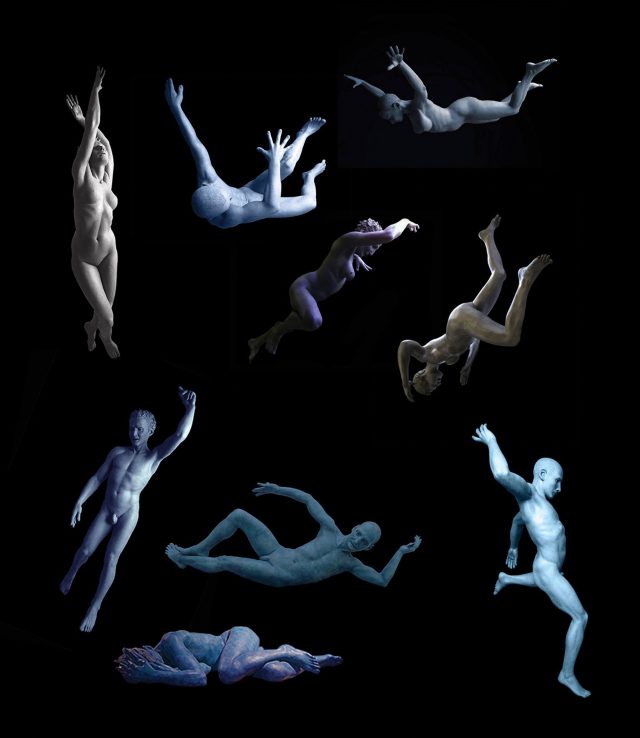 Representing a world of people who are “out for themselves”, Josie Spencer’s upcoming exhibition ‘Murmuration’ at The Playground Theatre, London, will have nine life-size sculptures suspended in the space.

Some figures are depicted as flying while the rest fall and land, representing the gross inequalities of money and power in society which lead some people to soar, but many others to sink and struggle.

With pieces going back as far as ten years, Josie Spencer’s ‘Murmuration’ sculptures were created in response to significant political and social events over recent years which have contributed to her view that society is increasingly fuelled by selfishness. 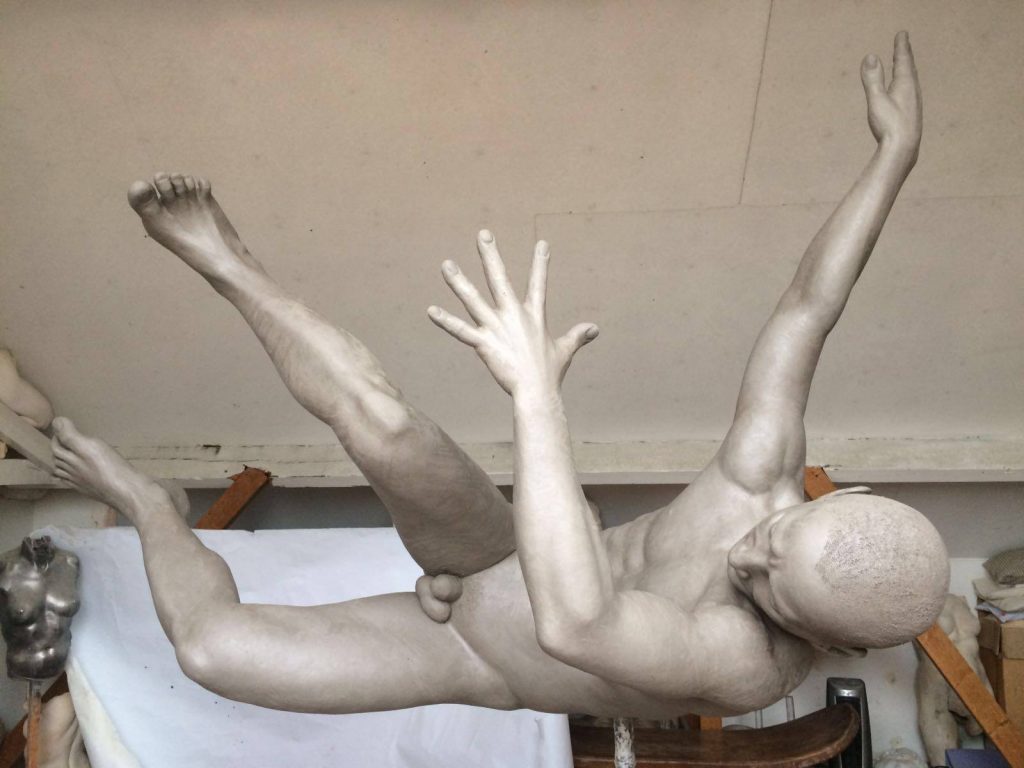 The title of the exhibition and the nine central sculptures adds an interesting depth of meaning to the works. “There’s no central control or interest in protecting anyone else,” Spencer explains, discussing the zoological definition of ‘murmuration’ while considering the distinctly similar ideas behind her sculptures.

“They are individually trying to save their own eggs.”

Spencer says that the exhibition is exploring a “sense of the fabric of the society being pulled, pushed and people being left out at the bottom in bigger and bigger numbers”.

The figures are depicted in differing states of comfort and discomfort. Spencer says this reflects that “there are so many that fall, but quite a lot of them are quite comfortable being out for themselves”.

Around the nine ‘Murmuration’ figures, Spencer will also arrange clay heads and fragments of sculptures in the exhibition space. 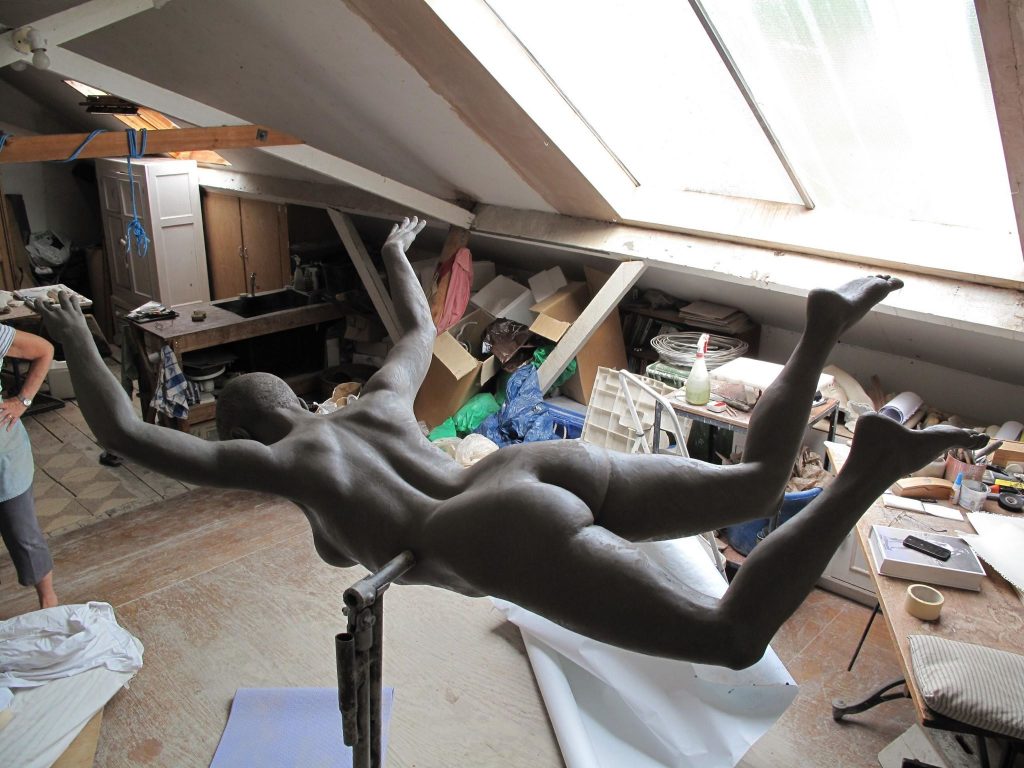 Expressing the destructive potential of wealth and power, the fragments draw inspiration from Shelley’s poem ‘Ozymandias’ – a particularly pertinent line of which is “Look on my works ye mighty and despair”.

When discussing the fragments of sculpture, she says that people sometimes respond, “Oh, I know what that feels like.”

The sense of fragile, cracking vulnerability is relatable for many viewers; the fragments are “a psychological portrayal for them”.

I asked Spencer if she viewed the fragmented sculptures as representative of a fragmented society. “Certainly, recent political movements have invited [society] to view itself as more fragmented – I don’t think it really is,” she says.

With the recent widespread demonstrations that called for increased gun control in response to the tragic shooting at Marjory Stoneman Douglas High School, Spencer views social attitudes around the world to be changing.

“And that, in the face of corporate power,” she adds, “is really quite remarkable.”

This sense of hope is reflected in the beauty of Spencer’s sculptures, which remain elegant and somewhat classicised despite the unbreakable states of falling of some of them.

“There’s a second thing that goes on and that is to do with the beauty of the figure and the sense that no matter how disastrous the direction things are going, we are still possibly the most dangerous, but also the most remarkable creatures, and beautiful in our own right.” 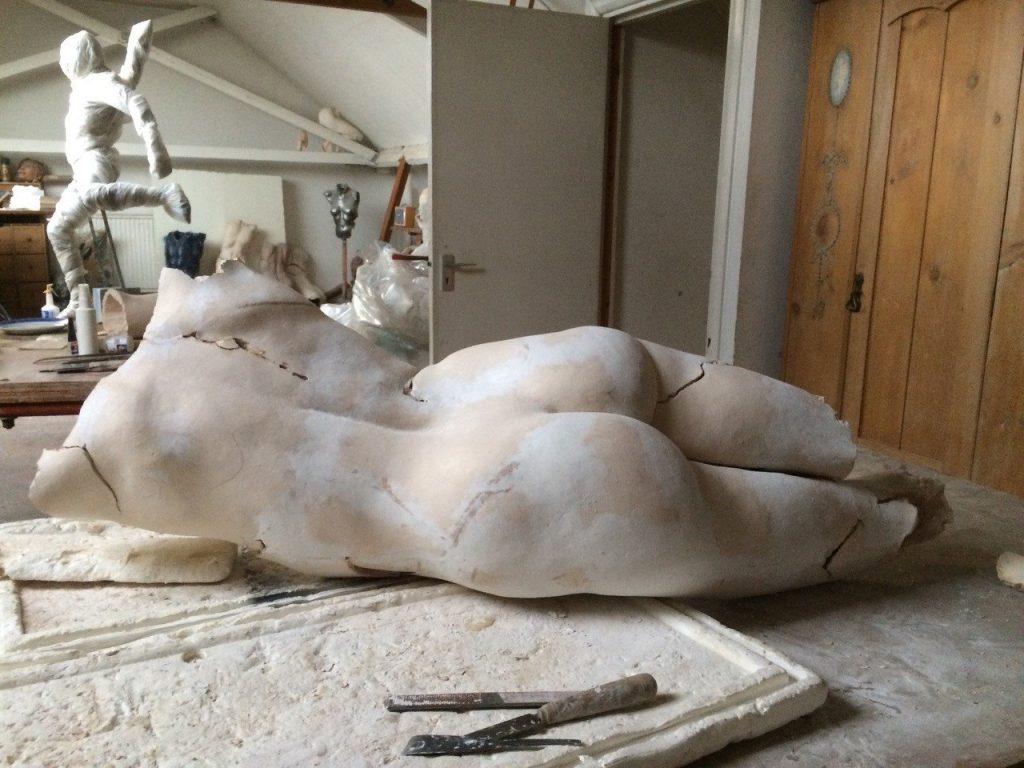 Anticipating how viewers will react to the exhibition, she says, “Sometimes they will pick up on the historical ideas, or sometimes they will just say, ‘but they are beautiful’. I’m hoping people will say that of quite a lot of them.

“That certainly is the optimistic side that underpins it, that as beings we are beautiful,” Spencer says.

“Our potential is enormous and beautiful.”

Penumbra: An interview with Rashid Khalifa